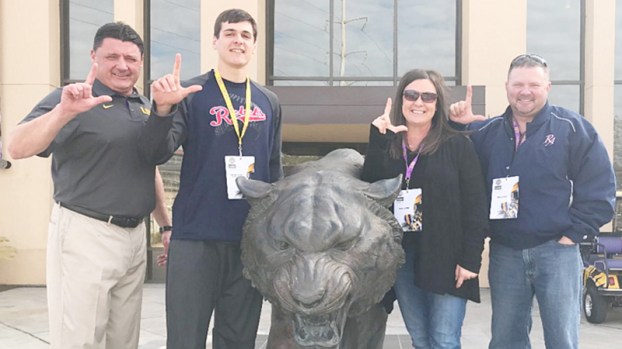 LSU football coach Ed Orgeron, from left, is joined by Jordan Loving and his parents, Tara and Rene Loving, during Jordan’s recruiting visit to Baton Rouge.

The 2018 Riverside Academy graduate and multi-sport standout elected to join LSU football as a preferred walk-on, knowing playing time would be a long, uphill battle.

The journey to the top may have shortened last week, when junior quarterback Justin McMillan and redshirt freshman Lowell Narcisse, a former dominating quarterback for St. James High, announced transfers within 24 hours of each other.

What it does signal, according to Loving, is an opportunity for more reps in individual practice drills. He said he’s picked up numerous skills thus far as he strives to learn the playbook and master throwing mechanics.

“I wish nothing but the best for the guys who left,” Loving said. “They’re great teammates and great people. It was a sad situation, but hopefully they succeed wherever they go in the future.”

Loving said football preparation has been hectic since school started, with morning classes followed by 12:45 p.m. lifting, a 2:15 p.m. meeting and practice from 4 to 7 p.m.

Jordan Loving lets one fly in warm-ups before a Rebels game during his senior season.

“It’s like a 7-to-7 full time job, but I’m embracing the grind,” Loving said. “I think of myself as a process guy. I’m working toward a long-term goal to get on the field. I’m at a great place here at LSU, but I haven’t accomplished what I set out to do yet.”

Loving has been a huge Tigers fan his entire life, and assuming a quarterback position at his dream school is a passion that never wavered among interest from other schools including Northwestern State, Louisiana College and Nicholls State.

Rene Loving said his son would do whatever it takes to play at the highest level.

“Hopefully, he continues to get more exposure at practice, but I think he just needs to continue what he’s been doing,” Rene said. “Ever since he missed his sophomore season due to injury, he’s been nonstop training to play at the highest position. He’s always been a hard worker, and he’ll continue to do that.”

Loving’s levelheaded decision-making sets him apart from other young athletes, according to his father.

“There’s so many chances for kids to make the wrong decisions, but he’s always been good about keeping his priorities straight and making good choices,”Rene said. “It’s a blessing to have that kind of kid.”

Loving said he thinks of himself as a smart player who can take command of the field and lead the team into the right sets.

During his senior year at Riverside, Loving threw for nearly 3,000 yards and 29 touchdowns, earning him a spot on the Louisiana Sports Writer Association’s all state football team.

Loving also received an all-state baseball recognition for his performance at first base and on the pitching mound, and athletic director Timmy Byrd named him one of the stars of the 2017-18 basketball season.

SCC takes to road for jamboree at Archbishop Hannan

LAPLACE — St. Charles Catholic coach Frank Monica said the Comets have a lot of weaknesses to strengthen during the... read more