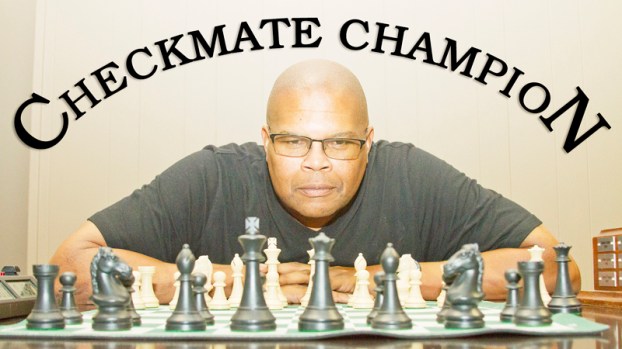 Louisiana chess champion René Phillips leans over a chess board, something he has done to amazing results after his high school football coach challenged him and his teammates to join the chess club. The LaPlace resident has grown into a national master of the game with hopes of starting a competitive chess team at the STEM magnet school in Reserve. “I enjoy seeing students benefit from chess in other areas, such as improved standardized test scores,” Phillips said.

LAPLACE — René Phillips of LaPlace first picked up a chess set on a dare from his West Jefferson High School football coach.

Watching the team struggle to learn a complicated play, coach James Stubbs declared the athletes were “all muscles and no brain” and suggested they could learn a thing or two from joining chess club.

Years later, Phillips is the reigning Louisiana State Chess Champion and a national master of the game, recognized among the top 5 percent of competitors in the country.

It is a common lunchroom scene to see René Phillips, right, playing chess with students at the St. John STEM high school in Reserve.

His professional success began in 1997 with a 5-minute blitz match win against former world champion Anatoly Karpov of Russia.

Phillips took a break from chess after Hurricane Katrina submerged his home, forcing a temporary relocation to Philadelphia.

He came back during the 2009 Louisiana Chess Championship and the Super National Coaches’ Tournament, where he attained perfect wins in the 10-minute, 30-minute and 60-minute time controls.

The Louisiana State Chess Championship trophy travels year-to-year with each winner. Rene Phillips of LaPlace has his name etched into a piece of the trophy’s history. He relinquishes the 2017 title next weekend.

Between teaching fine arts at the new St. John the Baptist Parish STEM Magnet program and serving as a deputy constable for Orleans Parish, Phillips runs The Chess Gym to lend his expertise to young chess masters in training.

Phillips was the first to receive the life title of Certified Professional Chess Coach from the United States Chess Federation, and he said the lessons the game provides are invaluable.

“It exercises those parts of the brain that we use for critical thinking and problem solving. I enjoy seeing students benefit from chess in other areas, such as improved standardized test scores. You see their self-confidence improve once they realize they are able to play a difficult game and play it well.”

Phillips plans to start a competitive chess team at the STEM Magnet school. Students have already shown interest, he said, noting small crowds gather around a chessboard with him during daily lunch periods.

“(Phillips) is not just any chess player,” Perry said. “He’s a champion. I appreciate what chess brings to the table in terms of memory and analytical skills.”

Jules Lebon, president of the Jefferson Parish Chess Club, described Phillips as a longtime friend, a methodical player and someone he doesn’t mind losing to.

Over the years, Phillips has seen former students rise to the rank of national master.

Rene Phillips faces off against student Miles Tisserand in the 2017 Louisiana State Championship.

According to D’Aquin, student Miles Tisserand nearly became the teacher when he and Phillips faced off in a final round of the 2017 Louisiana Chess Championship.

Phillips isn’t defending the title this year; slow time tournaments can take five hours per round and require 40 hours of attention over a weekend.

He prefers the challenge of blitz rounds.

“After the first two moves on each side, you have over 400 possibilities and configurations within those 64 squares,” Phillips said.

“It’s been reasoned there are more possibilities in a 40-move chess game than atoms in the known universe.”