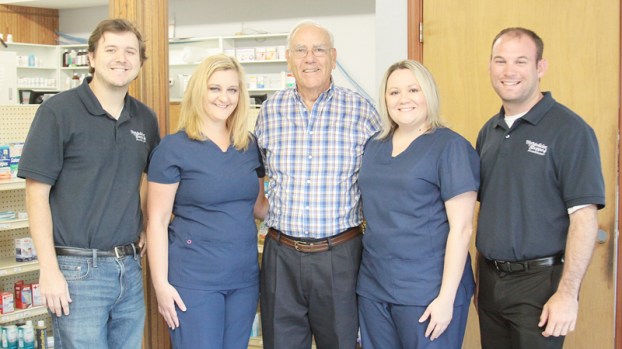 LAPLACE — Tommy St. Martin of LaPlace, 80, is preparing for his “second retirement” at the end of August, following nearly 55 years of service to St. John the Baptist Parish.

Tommy St. Martin, patriarch of St. Martin’s Pharmacy and longtime contributor of The Medicine Shoppe, is retiring this month after 55 years in the business.

Pharmacy was always the natural career trajectory for a young St. Martin surrounded by family members in the medical field.

After he was drafted in 1962, St. Martin spent two years working in a hospital at West Point Military Academy. He returned home to LaPlace, 26 years old and fearless, and opened St. Martin’s Pharmacy in February 1964 on West Fifth Street.

St. Martin first retired in 2005 and turned over the business to The Medicine Shoppe, now operating at 932 Carrollwood Drive in LaPlace, after 41 years of work.

For the past 13 years, St. Martin has reported to the store from 7 to 9 a.m. on weekday mornings to service Twin Oaks Nursing Home prescriptions.

However, the time has come to fully settle into retirement, and St. Martin is thankful for every decade spent working with people in the community.

“It’s a beautiful vocation that has served me well,” St. Martin said.

“It taught me there’s a need for that profession. People count on their pharmacist. You have to be open to people, listen, be kind and respect all walks of life. Life is a struggle for a lot of people, and you’re here to help them.”

Tommy St. Martin is finishing up his work at The Medicine Shoppe after starting St. Martin’s Pharmacy, above.

Each person walks into the drugstore with different needs to be met, according to St. Martin. Some people are warm and gentle. Others are anxious, in need of a listening ear.

One of the most belligerent men St. Martin ever saw enter the store ended up becoming one of his best friends. Customers often turned into familiar faces. Children and grandchildren of those customers and coworkers grew up and filtered through the store.

Since turning St. Martin’s Pharmacy over to The Medicine Shoppe, St. Martin has maintained a positive relationship with the pharmacy team.

The Medicine Shoppe manager Andrew Gomila said St. Martin’s genuine and caring personality has made him a pillar in the River Parishes.

“He’s somebody that has very strong morals,” Gomila said.

“He’s helped many people professionally and outside of pharmacy. Whether he’s giving someone a ride to the doctor’s office or helping somebody in need when they are at a low point of their lives, he’s always willing to help his fellow man.”

According to Gomila, St. Martin’s kindness extends to everyone, whether they are friends or strangers.

On many occasions, he helped connect those going through financial distress to health care resources. At the peak of his career, St. Martin worked 10 to 11 hours a day, six days a week. His wife, Jerrye St. Martin, was always his support system, a diligent mother to their three boys and willing worker if help was needed at the store.

St. Martin said he has enjoyed the flexibility to travel and spend time with his wife since scaling back in 2005.

School Board extends superintendent’s contract to 2019-20; works to up evaluation checkpoints