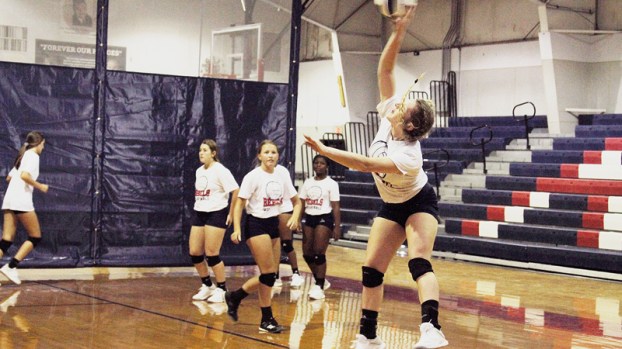 Volleyball is all about heart for Riverside’s Breanna Epperly

RESERVE — Over the years, Riverside Academy senior Breanna Epperly has played softball, joined swim team and danced ballet and tap, but the only sport to truly capture her heart is volleyball.

The seed was planted six years ago, when Epperly found a flier for Southern Swing Volleyball stuck to a car windshield.

She’s excelled at the libero position ever since, using her energy and small stature to strengthen her team’s defense.

“Volleyball is somewhere I can relax and not focus on anything else except for just the court,” Epperly said. “I don’t notice anything about the floor, the stands or the line judges. It’s me, my team and the court.”

Epperly specializes in passing for the Lady Rebels, often diving to the floor to keep the ball airborne and in play. She loves the thrill of a fast paced game, and when her team syncs together, she thinks of them as family.

At practice, Epperly is working on midline drills, ball control and building faith in the newest members of the team.

Epperly has taken the court by storm during recent preseason scrimmages, demonstrating an unexpected intensity that took head coach Brandi Melancon by surprise.

“We had our first scrimmage last week, and she was just on another level,” Melancon said. “We’ve seen that from her up and down, but she just came out and played her heart out. She made a big statement when she stepped out on that court. She let me know she had my back and her teammates’ backs.”

Melancon said Epperly patiently waited for her turn to shine. Even when older girls started ahead of her in the libero position, she always showed up focused and ready to work.

Epperly’s heart and diligence drive her toward success, according to Melancon.

“You either have heart or you don’t,” Melancon said. “If you don’t have a love for this game, you’ll never survive back there in that position.”

Epperly said volleyball isn’t a sport that can be played halfheartedly.

“It’s not something where you think, ‘oh, this will be a fun after-school activity,’” Epperly said. “You have to see it as a pact you put your whole heart into. I’m so happy being a Rebel and knowing this is something I want to fight for.”

Her other skills include an ability to read the ball well and move quickly in any direction. If the setter is ever injured, she’s prepped to take on the position.

She bases her energy off of volleyball role model Maddie Duhon, junior coach for the Lady Rebels and 2017 graduate of Riverside Academy.

Epperly expects the 2018 season to be a learning experience for a team laden with underclassmen. Her goal is to give them the guidance they need to keep the volleyball program thriving.

After graduation, Epperly hopes to play volleyball at Louisiana College or Louisiana Tech while pursuing a creative career in architecture.

Epperly is the daughter of Thomas and CheraKee Epperly of Reserve.

NORCO — The St. John Sheriff’s Office rescheduled its free fishing camp for children for Sept. 15 at the Bonnet... read more