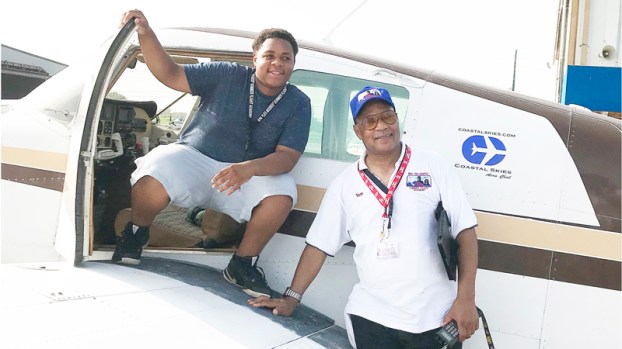 LAPLACE — From the time he first climbed into the cockpit of an airplane at 3 years old, Tristan Green never had any doubt that he would grow up to become a pilot.

The 17-year-old East St. John High School senior took his career preparation miles above his peers last month when he took his first solo flight on an aircraft at Les Morris Summer Flight Academy in Houston.

The LaPlace resident put three years of flight training with instructors to the test as he ascended into the sky in a Beech 19 airplane, flew around the academy and navigated an unexpected crosswind before landing safely.

“I had a moment after I landed, thinking, ‘Wow, I finally got it done,’” Tristan said.

“Part of it was relief that I did a pretty good job with the crosswind. I felt emotional because of all the studying I’ve put in to get to the solo, and the main feeling was happiness. It made me feel amazing to think, ‘man, I’m a young pilot.’”

Tristan’s father, Paul Green Jr., was there to embrace his son as soon as he climbed out of the aircraft.

Tristan’s next step is to take an upcoming written test to obtain his private license. After graduation, he plans to attend Louisiana Tech University in Ruston and enroll in the No. 1 aviation program in the state.

He sees a number of open paths for the future, whether he chooses to fly commercially for Southwest Airlines or operate a cargo jet for FedEx.

“It doesn’t matter what type of business or aircraft corporation I end up in,” Tristan said. “I just want to fly. It’s my passion and the most relaxing thing in the world. If you have a dream, you have to go for it. You can’t let anyone stop you.”

The exhilaration doesn’t discount the focus and attention to detail required to successfully operate an aircraft, according to Tristan.

Flight instructor Thomas Newman said Tristan attended the Summer Flight Academy twice, though he was too young to take his solo flight the first time.

“For a youngster his age, he’s highly motivated, skilled and listens well,” Newman said. “The solo flight is a major accomplishment. To do this at 17 is amazing, especially when you consider how few Americans are in aviation. He’s a minority youth in a field where there are very few young people.”

Cutting out the back of the shirt worn during the first solo flight is an aviation tradition to signify a pilot no longer needing the instructor to sit behind him and tug on the back of his shirt. Those pictures are Theresa Green to the left of Tristan (mother), Ellian Green to his right (brother), back row: Earnestine Joseph (grandmother), Kyron Joseph (cousin), Kayla Ellis (cousin), Paul Green (father), and Cedric Grimes (mentor).

Newman said it is evident Tristan has a strong support system of family members and aviation mentors.

Tristan’s mother, Theresa Green, was initially against him flying out of fear for his safety, but she was overwhelmed with pride when she saw his passion.

“I could see it in his eyes how much he wants this, and I knew I can’t hold his hand forever,” Theresa said.

Tristan said he’s grateful for the support of Pastor Donald August and his church family at Rising Star Baptist Church of LaPlace.