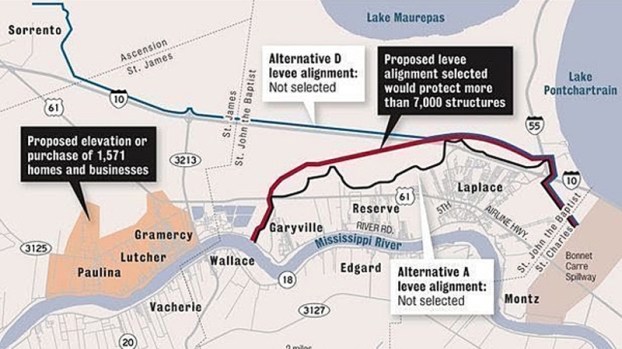 LAPLACE — Larry Larousse expects the announced $760 million levee to help protect his LaPlace family and neighborhood, but he’s cautious when considering it an infallible solution — one that would have prevented the type of flooding that destroyed his home during Hurricane Isaac.

In a scene similar to so many across St. John the Baptist Parish, every time it starts to rain Larousse says his wife gets anxious water will again seep into the house.

Larousse wants to see updated plans for levee pumping stations with a larger focus on LaPlace in accordance with population.

“You don’t realize the emotions people have to go through during a natural disaster unless you’ve been through it yourself,” Larousse said. “As far as the levee, I’ll believe it when I see it.”

The Westshore levee project is expected to be complete by 2023, officials announced Monday afternoon in LaPlace. The five-year timeline includes two years of planning and three years of construction.

Finalizing design and securing real estate for the 18-mile levee are the next steps, according to Colonel Michael Clancy of the U.S. Army Corps of Engineers New Orleans District.

“We’re working in conjunction with the Coastal Protection Restoration Authority and the Pontchartrain Levee District to get the real estate that will ultimately own the levees,” Clancy said.

“It’s a lot of work, but we want to make sure we know exactly where the levee’s going and get the land before we start building it. Hopefully, by late 2020 or early 2021, it will be in construction and we will actually start to build the levee.”

Michael Layton of LaPlace recalls lake tides bringing enough water into his LaPlace house to displace him into a backyard camper for eight weeks.

He’s taking a wait-and-see approach as to whether the levee construction maintains its proposed timeline.

“It’s taken 40 years, and now they are talking about designing,” Layton said. “It should’ve been already planned out and ready to start, otherwise how do you know how much it costs?”

Parish President Natalie Robottom said St. John the Baptist Parish is going to be instrumental in property acquisition by making sure agencies understand the needs of the community.

Parish President Natalie Robottom presents U.S. Rep. Garret Graves with a key to St. John Parish as a thank you for his work securing federal funding for levee protection.

She expects the real estate portion of the project to progress without delay, noting the Louisiana Department of Wildlife and Fisheries owns a bulk of the land needed for construction.

“We have 11 contracts and a combination of agencies that are working together, and I think that will allow this project to move very quickly,” Robottom said.

According to Robottom, the levee should protect at least 100,000 people across St. John, St. James and St. Charles Parishes. She said it would run close to other ongoing resiliency efforts, including a diversion project restoring wetlands near Mt. Airy.

In April 2017, St. John Parish residents passed a property tax that Robottom said would help collect $50 million over time to go toward repayment and levee maintenance.

U.S. Rep. Garrett Graves (R-Baton Rouge) said the Westshore levee will pay for itself in the event of a natural disaster.

“Think about the money we spent picking up the pieces after Hurricane Isaac,” Graves said. “We need to spend millions before disasters, not billions after.”

Graves and St. Charles Parish President Larry Cochran said they were impressed with the teamwork the River Parishes demonstrated to diversify funding streams.

Approximately 1/3 of the nation’s $100 billion Corps of Engineer projects are in Louisiana, Graves said, creating a “major math problem” that made full funding almost inconceivable.

Robottom said the Parish lobbied hard for the levee because of its impact on the River Parishes and beyond.

“They’re going to move. A lot of the country depends on the industries we have along the river, so it’s very important for those and the Port of South Louisiana to be protected.”

The flood protection system, designed and vetted by the United States Army Corps of Engineers, includes earthen levees, floodwalls and pump stations, extending 18 miles from the Bonnet Carré Spillway to the Hope Canal in Garyville.

Ring levees will also be created around Gramercy and Lutcher.

The new system starts out where the New Orleans system ends at the Bonnet Carré Spillway and moves west to cover all of St. John Parish and provide relief to a portion of St. James Parish, according to Ricky Boyett, chief of public affairs for the Corps.

“You build a combination of features to which, when the storm comes, the area behind that, what we call the protected side, has a 100-year elevation or a 100-year storm surge risk reduction level,” Boyett told L’OBSERVATEUR when discussing the project last year.

“A 100-year storm surge event or hurricane means it has a 1 percent chance of occurring in any given year.

“That is the same level of risk reduction that the post Katrina hurricane system was constructed to.”

Stressing all storms are different, Boyett noted Hurricane Isaac was not up to the level of a 100-year storm. Had the proposed levee been in place, Boyett said St. John Parish would not have seen the Isaac flooding.