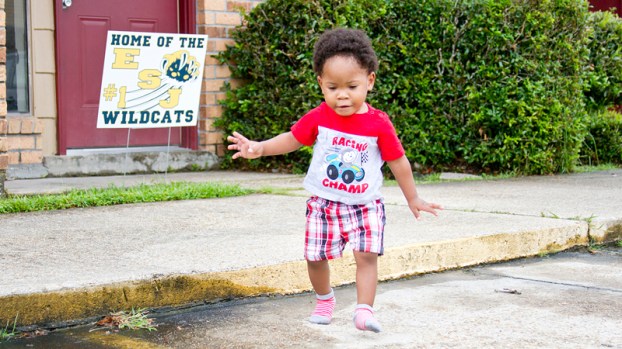 One time, Vernon L. Gordon Sr. was holding his son close to his chest at Tulane – Lakeside Hospital when the little boy’s color drained from his face.

It was quick and unexpected; one moment, the family was resting peacefully, and the next, doctors were rushing to revive the infant.

V.J.’s heart has stopped on separate occasions at his LaPlace home, prompting his mother, Dana Jones, father and 14-year-old sister, Danyale Jones, to become certified in administering CPR to children who have a trach tube.

Vernon “V.J.” Gordon Jr., according to his parents, has a wonderful attitude and acts like a typical little boy despite many health problems.

Outsiders looking in would never guess what V.J. has endured. He’s an active, happy toddler, quick on his feet and always ready to get into mischief.

Dana said her special nickname for V.J. is “Deuce,” signifying him as her second born who entered the world two months premature and spent two months in the hospital before coming home.

When V.J. was born, his tongue placement obstructed his breathing and needed to be corrected with reconstructive jaw surgery.

Danyale Jones, 14, holds baby brother V.J., who she helps care for. Danyale is certified to administer CPR to children who have a trach tube.

He faces a plethora of health challenges, including bowel obstructions, temperature instability, low blood sugar and kidney issues. To date, V.J. has recovered from 13 surgeries, and he receives medical services through appointments with his doctors, home visits and early intervention.

Though he still needs oxygen and can’t yet eat solids, V.J. faces every day with a smile.

“We can never tell if he’s hurting or sick because it doesn’t show,” Dana said. “That’s Superman. Looking at him, you’d think nothing was wrong. If you’re down, he’ll bring you up.”

According to Dana, V.J.’s battle is far from over.

V.J. Gordon has dealt with serious health issues since his premature November 2016 birth.

“This road is not easy, but it is worth the journey,” Dana said.

“God doesn’t give you more than what you can bear. He gives His toughest battles to His strongest soldiers.”

The greatest challenge, according to Dana, is watching her young daughter take on responsibilities that would overwhelm the average adult.

Danyale said it wasn’t difficult to learn how to take care of her brother because the hospitals provided all of the needed tools. She’s a devoted sister when it comes to checking on V.J. and running after him.

“When I come from school, I’ll make sure he ate,” Danyale said.

“In the morning, if my mom is sleeping, I’ll check on him to make sure he’s breathing and change his diaper. I keep him out of trouble. He’s always running into something and trying to destroy the house. He’s a healthy baby.”

He’s working on mastering speech, feeding, sign language and how to keep still.

Vernon Sr. said the most important lesson V.J. has taught him is patience.

“I’ve learned to endure so much because of him and how much he fights,” Vernon Sr. said. “Never give up on your child. Always have faith and believe in them.”

As you begin to hear the whistles from nearby high school coaches, that can only mean one thing: Yes, it’s... read more