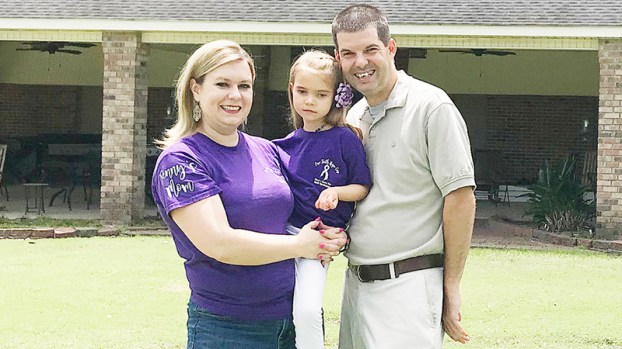 Pam Brady holds daughter Penny Brady while they stand next to Ronnie Luman, who is hosting a fundraising golf tournament to raise money for Penny’s upcoming drug trial.

LAPLACE — For nearly 20 years, Ronnie Luman of LaPlace has combined his love of nonprofits and expertise in golf to raise money for causes close to his heart.

When Luman met 5-year-old Penny Brady and her mother, Pam Brady, friends of his wife and stepdaughter, he found a new cause to support.

Penny developed typically until she was 18 months old, when Rett Syndrome stole her speech, muscle tone and hand coordination. For the past four years, she’s been trapped in a body that doesn’t cooperate with the signals her brain sends.

“I had never heard of Rett Syndrome,” Luman said. “Once I learned about it and put a picture to it, doing this for Penny was a no-brainer. My goal is to take all the stress off her family and see a smile on her face.”

Proceeds go toward expenses associated with Penny’s Trofinetide Phase 3 drug trial, which requires frequent travel to and from Texas Children’s Hospital in Houston over a period of six to 12 months.

The drug trial, once slated to begin this year, has been pushed back to the latter half of 2019. However, Brady said the delay does not signal bad news.

“They have so much confidence in this drug that they are hoping, as soon as this trial is over, they’ll be able to put it out on the market,” Brady said.

Luman hopes to have 20 teams sign up for the golf tournament by the first week of September.

“We want people to come out, eat, drink and have a great time playing golf without stress,” Luman said.

Sponsorship options start at $150 for one hole sign on the course and $300 for a foursome to enter.

A $3,000 Presenting Sponsorship includes entry for three foursomes, signage on the course and range, and recognition as the presenting sponsor during the tournament and after party.

He’s raised money for ALS patients and It Takes Lives to Save Lives, and he was recently recognized as a New Orleans Finest Honoree for cystic fibrosis with a goal to fundraise $5,000.

“I’ll put in as much time as it takes to put on a successful event,” Luman said. “These people fight struggles every day, and it doesn’t bring them down. Our inspiration comes from them.”

Local businesses are welcome to donate items for an on-site silent auction.

To reserve your team or hole sponsorship, email ronaldluman76@gmail.com or pennygolftournament@gmail.com.