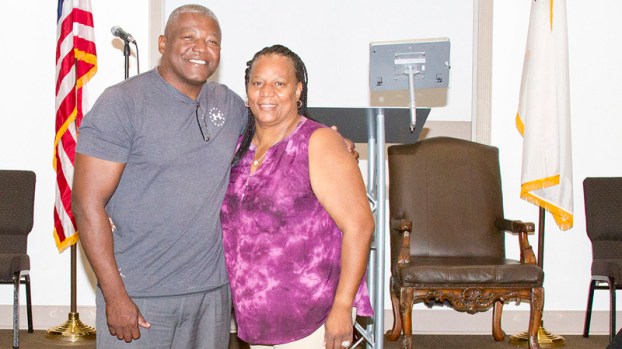 Bishop Ronald Frank and Cherry Frank stand inside Milesville Memorial Church of God in Christ, which reopened this month after six years away following Hurricane Isaac’s wrath in St. John the Baptist Parish.

Members stuck together after Hurricane Isaac ravaged the building in 2012 and dutifully gathered each Sunday, first in the empty lot outside the damaged building and later at various other St. John the Baptist Parish churches.

The hurricane damage to Milesville Memorial Church of God forced a six-year wait for refurbishment.

The Milesville Memorial family returned home after six years on Aug. 5, when more than 350 parishioners flocked to the newly constructed building at 129 Apple St. in LaPlace.

Bishop Ronald Frank and his wife, Cherry Frank, said the excitement was palpable as the surrounding area overflowed with people young and old.

“The storm destroyed our building, but it didn’t destroy our church,” Ronald said. “It was a hard hit, but I didn’t let it discourage my faith because I knew God would bring us back. The return showed us the community missed us being here as much as we missed it.”

Through the end of August, Sunday service will be held at 11:15 a.m.

As members and leadership settle back into a routine, Cherry said an additional morning service, midday Wednesday service and Wednesday evening Bible study will resume.

An outdoor service is held in the empty lot outside the damaged building.

Youth nights and women’s, marriage and single ministries will be re-implemented next month, she said.

“We had those outreach ministries before we were destroyed,” Cherry said. “The other churches were kind enough to let us use their sanctuary, and we were so grateful just to be able to have a church on Sunday.”

Hurricane Isaac was the second storm to shut down the Milesville Memorial Church of God in Christ since it was built in 1911, the first being Hurricane Betsy in 1965.

Isaac ripped off a metal roof that had been installed only a week before, leaving the inside of the church exposed to extensive water damage. Early renovation efforts revealed termites had torn into the foundation of the building.

In the six years that followed, Providence Baptist, Plymouth Rock, Bethlehem Baptist and New Pilgrim became temporary homes, and monetary help flooded in from near and far.

“We had donations come in from as far as New York and Los Angeles,” Ronald said. “We made national news. Here in the River Parishes, churches were donating their tithes to us.”

The first donation to come in, according to Cherry, was courtesy of School Board member Russ Wise and his wife, Connie. The couple handed out donations to several local churches directly following Hurricane Isaac. When Russ Wise was unable to locate anyone on the broken grounds of Milesville Memorial, he slid an envelope containing a check halfway in the door.

“We’re so thankful we were in a position where we could help these little churches that were faced with huge costs,” Wise said. “We helped provide the materials, but they did 90 percent of the work.”

According to Cherry, no one touched the check before it was discovered several weeks later.

Giving Back: LaPlace 14-year-old always gives for others

LAPLACE — Arianah Newsome’s life is ever changing as her family travels around the country for her father’s career, but... read more