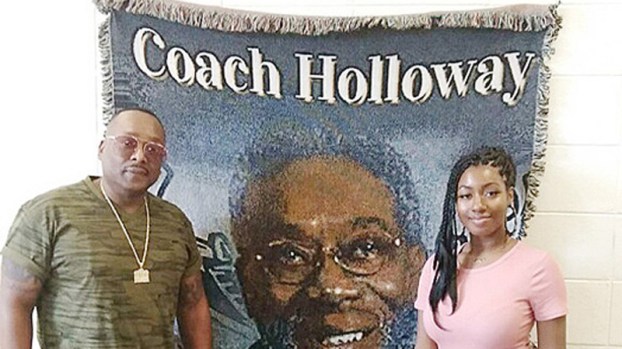 Known as Coach Holloway to his students, “Holly” to his family and “Lou” to his colleagues, Holloway coached generations of East St. John High Wildcats from the 1960s to the early 2000s.

Holloway passed away July 28 at age 75, but his legacy shines bright in St. John the Baptist Parish.

Creecy, Parks and Recreation Director Kerry Watkins and former Georgia Tech football standout Greg Gathers were among those he led in football and track and field.

“He was always available, always hands-on and easy to talk to,” Creecy said. “He always made time and treated everyone the same, no matter the caliber of the athlete. Those are things I try to do with the Legends.”

When Creecy’s ACL injury sidelined him from the football field at Southern University, he was able to fall back on a track and field scholarship. Creecy credits his college selection and eventual career path to Holloway.

Now, he is carrying the torch and guiding a new generation to collegiate athletic scholarships.

Gathers said Holloway was free spirited and kept the energy light with victory dances on the locker room table.

“He always has something positive to say, and that’s what stays with you as you go through the game of life,” Gathers said. “Even when I had my kidney transplants, I learned to stay positive. His spirit was contagious.”

Ulysses Frontha coached track and field at Destrehan High School in the 1990s and regularly competed against Holloway’s team.

“Even though we were competitors, we were good friends,” Frontha said. “We had a good working relationship, and he did whatever he could for those kids. He helped so many of them get scholarships. That’s the kind of coach you long to be.”

Williams said Holloway was a “super coach” who enjoyed a collegiate baseball career at Southern University, where he played alongside hall-of-famer Lou Brock.

Holloway, a lifelong resident of Garyville, earned a masters in education from Southern University after graduating from Fifth Ward High School in 1962. After retiring from teaching and coaching at East St. John, Holloway kept busy delivering Council on Aging meals to the elderly every weekday morning.

Victoria Fleming, Holloway’s youngest sister, said she’ll dearly miss seeing her brother drive over the railroad tracks and stop in front of her house each morning to check in on her.

Holloway loved long conversations with people, whether they were “family, strangers, black, white or purple,” Fleming said, adding her brother never wanted anyone to worry about him.

Even when he was diagnosed with lung cancer, he told his loved ones he was fine.

“We never knew if he was angry or sick because he never fussed,” Fleming said. “He would do everything for my sisters and I while growing up, being we were so much younger than him. When we found out he was sick, I told him, ‘It’s our turn to take care of you.’”

Holloway was a father figure to Charonika Williams and Lemey Ross, and he’s dearly missed by a host of siblings, grandchildren, nieces and nephews.

RESERVE — When Kash Foley strapped on his gear and stepped onto a football field for the first time, he... read more