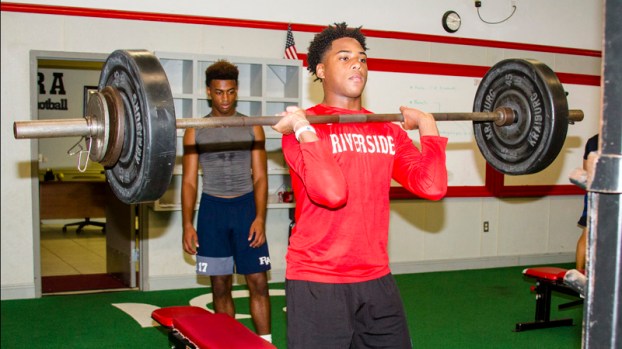 Kash Foley has been putting in work in the weight room for the Rebels with sights set on making an impact for Riverside Academy on the offensive and defensive side of the ball.

RESERVE — When Kash Foley strapped on his gear and stepped onto a football field for the first time, he was 6 years old and participating at his mother’s urging.

He had no concept of his innate athleticism or how far it would propel him. As he moved up through the St. John the Baptist Parish recreational age divisions, he grew a love for the sport that now shines bright on the Riverside Academy football field.

Foley is a wide receiver, fast on his feet on the offensive side of the ball.

According to head coach Kevin Dizer, Foley has also demonstrated a dual talent on defense during spring and summer training.

“He’s shown a completely different element of how good he can be,” Dizer said.

“Kash is a kid who has always been talented, and he’s continuing to work hard and get better. He’s one of the best players in this area, if not the state, and we look for big things out of him this season.”

According to Foley, he and other Rebels have to take on more responsibility on both sides of the ball to fill shoes left by recently graduated seniors, including four who now participate in college football programs.

He recently visited Southern Miss and Arkansas State, and plans to pursue business management at whichever school he chooses. In coming weeks, he will narrow his choices down to the top 5.

Entering his senior season, Foley is prepared to take on a quiet leadership role built around camaraderie and encouragement.

“Leadership is about talking to your guys,” Foley said. “If one of the guys makes a bad play and they’re feeling down, cheer them up. Let them know they’ll do better on the next play.”

Most of all, Foley is looking forward to edging past the semifinals, where the team fell last season, and recreating the Rebels’ magical 2016 championship win.

“The atmosphere was crazy,” Foley said. “There were fans everywhere. Every time we scored, there was a lot of loud screaming.”

The Rebels are putting in pre-season work under the direction of Dizer, who has been on the coaching staff since the seniors were freshmen, according to Foley.

“I think we’ve got a good connection,” Foley said. “The season is going to be good. We’re not the same team as last year, but we are going to be tough and not as easy of a team to beat this year.”

In addition to excelling on the football field, Foley is a mainstay of the Rebels basketball program, through which he earned a first team all-district recognition.

Foley is the son of Kiandre Bardell and Floyd Foley of LaPlace.