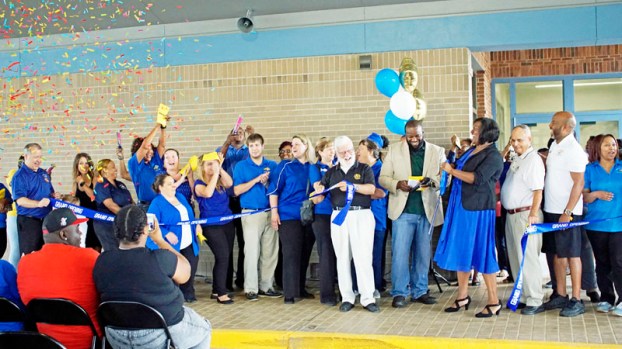 RESERVE — Vowing to not allow the building to be amazing on its own but to do amazing things inside, Principal Johnika Gayden-Gaines cut the ribbon Saturday to officially open East St. John Preparatory Academy.

The school at 400 Ory Drive had been closed since a fire destroyed the main parts of the building just days into the 2015-16 school year. Since that time, students had been attending class at the school district’s Leon Godchaux campus.

During the ribbon-cutting ceremony, Superintendent Kevin George recalled showing up at the scene of the fire in the middle of the night where the school’s staff had already gathered.

“They told me, ‘Superintendent George, we’ll teach in tents if we have to. Nothing is going to stop us’ … and it didn’t,’” he said. “On a temporary campus, they moved their school 10 points from a C to a B school.”

The new addition includes an administrative and assembly wing with a new library/media center, teacher’s lounge and work spaces, student “commons” area and cafetorium space that includes a fully equipped stage for performances. The school will also feature a new gymnasium that remains under construction.

The existing undamaged portions of the school that were not demolished as part of the project were renovated with new wall and ceiling surfaces, as well as new paint and other building finishes.

The renovation work also included the installation of new light fixtures, casework and classroom furnishings as well as the replacement of the existing HVAC system and components.

All exterior components, including windows, doors and roofing systems, have been designed to meet the code mandated 144 mph wind load requirements.

The new school facility also incorporates safety and security measures to assist in providing secured entry and access into the building during school hours.

RESERVE — Detectives with the St. John Parish Sheriff’s Office are asking for the public’s help in identifying suspects in... read more