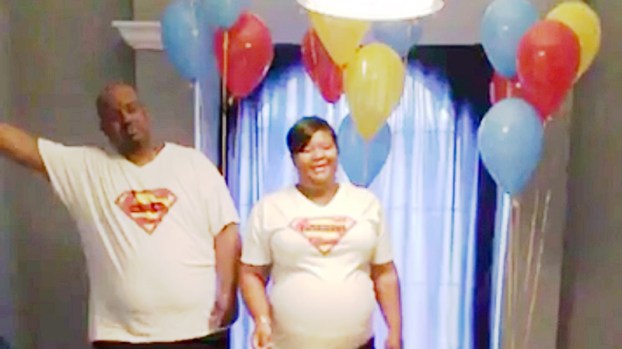 Wendell and Miya Brown celebrate at their gender reveal party, where they announced triplets are coming.

Reserve couple blessed with triplets after years of trying

Family and friends of the Reserve couple recently gathered around a box, anxious to see whether it would release a mass of pink or blue balloons. When it opened, the only balloon to float up was a golden No. 3, signifying triplets.

Miya and Wendell’s sweet little girl, bouncing baby boy and mystery baby who has stubbornly evaded each ultrasound are due to arrive Oct. 28, and they aren’t the only set of multiples blessing the family this fall.

The triplets have twin cousins due the very same day.

The two pregnancies mark the third instance of multiples within two family generations. Miya’s brother Stefen Hawthorne is the twins’ father and a fraternal twin himself.

When Wendell’s grandmother and great aunt, also twins, are added into the mix, multiple births don’t seem so rare.

According to the U.S. National Library of Medicine, few specific genes in humans have been linked with an increased possibility of twins or multiple births, though fraternal twins are twice as likely when a woman has a mother or a sister with a fraternal twin.

Miya said the coincidence is astonishing, but she doubts all five cousins will arrive on the Oct. 28 due date.

“I’m not going to make it that long,” Miya laughed. “There are three of them in there. I’ll run out of room.”

Adrian Martin, Miya’s longtime friend, said the Brown family is fulfilling a dream that’s been years in the making.

“I’m really happy for her,” Martin said. “She and her husband have been trying for a long time, and now they’re having three babies.”

Miya said her three-and-a-half-year struggle to get pregnant was emotionally taxing, and there were instances when it made her feel inferior to other women.

“As a woman, I felt like it was something I was made for and put here to do,” she said. “I had the idea that it was something that was supposed to be easy, and it ended up being very difficult.”

She is at peace with the experience, realizing every woman’s journey is different.

“Everything has its own timing, and I think everything happens for a reason,” Miya said.

After their miracle multiplied by three, Miya and Wendell quickly adapted to the surprise and have since been working to gauge which supplies they need three of and which items the babies can share.

RESERVE — In between matches at a professional tennis tournament in Baton Rouge this summer, the youngest U.S. Open Junior... read more