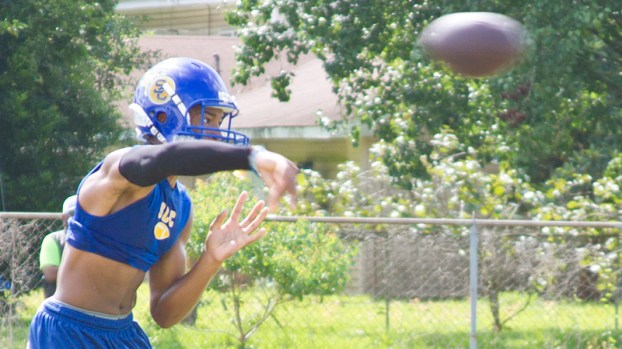 MCCOMB, MISS. — Free from the distractions of technology, the St. Charles Catholic Comets team has spent the week bonding as a brotherhood on the quaint grounds of Percy Quin State Park in McComb, Miss.

It’s an end-of-summer Comets tradition of 18 years, picked up from head coach Frank Monica’s time with the Tulane Green Wave.

The goal, according to Monica, is to return home this weekend with fully installed offensive and defensive systems, building upon progress made in spring football and summer conditioning.

“We do a little bit of conditioning, but it’s not designed for that,” Monica said.

Jacob Ganote speaks at the recent Meet the Comets.

“We’re getting them into a different environment, away from home and away from the cell phone and TV. It’s all football. Knowing that, the focus is on learning the system and, most importantly, being a good teammate.”

Earlier this week, 93 new and returning players introduced themselves to the local community during Meet the Comets Night.

Monica said there are a lot of new faces this year, which could make the upcoming season “awfully tough” without an intense level of preparation to place athletes in ideal positions.

Lorio emerged as a possible punter, showing versatility as he diverged from his mainstay position at cornerback. Narcisse also proved powerful and difficult to block during camp, Monica said.

Dumas continued to perform well at quarterback, while Fabre showed strength subbing as a kicker.

The offensive line is still developing its sea legs, according to Monica, be the depth chart should be solidified in the coming weeks.

“There’s a possibility some young kids will come in and break through, but we don’t know that for a fact yet,” Monica said. “We won’t know for sure until we get pads on them. When you put pads on, it magnifies weaknesses.”

Previously held at Nicholls State University and St. Joseph’s Abbey in Covington, the five-day training camp is unique to St. Charles Catholic within the River Region.
The boys started each day early, waking up at 5:30 a.m. to prepare for 6 a.m. practice. After a couple of hours of running plays, they headed over to a full breakfast and transitioned into individual meetings.

Practice picked back up in the afternoon and continued on through the evening, followed by more individual attention and an hour-long group meeting.

Just before bed, the Comets bonded in an open forum setting.

“What’s talked about there is kept confidential for the kids, because sometimes personal stuff comes out,” Monica said. “It stays within the team. It makes the kids feel pretty special. It’s a rite of passage and makes them feel they belong to something.”