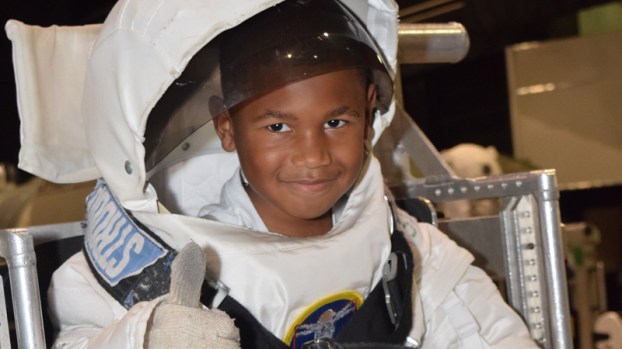 “We’re going to hire scientists and police to make robots that help people in need by giving them things and delivering things to them,” he said. “My motto is ‘helping is the future.’ ”

The Wallace 10-year-old, who is now my new favorite young scholar, broke down his vision to me this week, explaining how he wants to combine two of his favorite pursuits: Science and helping those in need.

The soon-to-be fifth grader at Ascension of Our Lord Catholic School is drawn to science because it’s all about “discovering unknown things for the future.”

He has his sights set on becoming an astronaut, the first to make it to Mars. He’ll settle for second if someone else gets there before him. He is close to mission ready thanks to numerous NASA space camp and STEM project completions.

He’s drawn to helping because of the example of his mother, ReShonn, and grandmother, Emelda.

He sings in the youth choir and is active in youth Bible class and children’s church at First Community Antioch Baptist Church of Lutcher, under the pastoral leadership of the Rev. Ferdinand Gaines Jr.

He is the type of young man who gets others involved and prays for those in need. Emelda told me her grandson came to her four years ago with a desire to help needy children during Christmas. They prayed and were connected with a family that included a grandmother raising five grandkids on her own.

Rashod, Emelda and others put together a wish list of toys, supplies and food for the family just in time for a Christmas delivery.

The wonderful feeling must have stuck, because things have only gotten bigger from there. Rashod ran a lemonade stand in 2017, raising enough money to buy seven school bags filled with supplies for local students in need.

Another year meant bigger stakes for Rashod and his family.

“This year, we did a lemonade stand again and he told me, ‘Mamaw, we have to sell more stuff. Can you make some pies for me to sell at my lemonade stand,’” Emelda recalls. “Of course, Mamaw is going to say yes. His mom had to make pecan candy. We sold hot dogs and stuff. We’re going to be able to give away at least 16 backpacks this year filled with school supplies.”

The excitement closes out this weekend as Rashod, Emelda and ReShonn place all the names of needy children they have received in a hat and pull out winners on a live Facebook feed.

“He has a whole way of doing it, pulling the names one at a time and showing the bag as he is pulling it, saying what child is getting it and from what school,” Emelda said. “St. James Parish, St. John Parish, it doesn’t matter as along as the child is in need. After he finishes doing this, the child stops and prays, giving God thanks. His mama is a single parent and she is raising him. She is able to have a good job and take care of them and not be in that situation. He realizes how blessed he is.”

The goal is simple, but crucial.

“It’s important to help others in need,” Rashod tells me. “My favorite part of the drawing is the people I am going to help.”

Rashod Saul is a regular at space camp and all things related to STEM education.