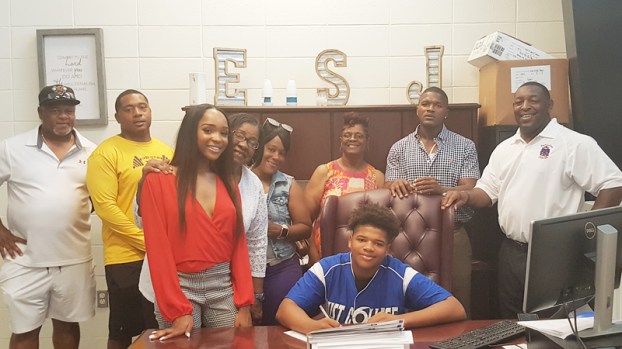 LAPLACE — Herman Farlough of Reserve decided his best shot at a stellar senior season on the pitching mound was to immerse himself in a summer baseball program where hard work is required.

He’s one of several East St. John High baseball players to find success far beyond the Wildcats diamond this summer in hopes of building skills and finding a spot on the college recruitment radar.

Recent graduate Jikari Martin achieved his college goals this week when he signed a binding contract to play baseball at Rust College in Mississippi. He plans to keep up the momentum at third base while pursuing a degree in business administration.

If successful, the team will fly to Minneapolis to compete in nationals.

Farlough spent most of his summer working on his fastball, changeup and cutter with the Atlanta Blue Jays. He arrived in Georgia the day after school let out and has participated in more than 30 games, pitched in seven and struck out approximately 40 batters.

“I went to the Blue Jays because I heard it’s all about hard work,” Farlough said. “I started playing baseball at 7 as a first baseman, and I always threw hard, but I never had anyone to push me. Going into my 11th grade year, I started pushing myself. I want to make it to the big leagues.”

Before he makes it big, Farlough wants to make the playoffs with East St. John for a chance to pitch in a championship.

Last month, he traveled to Bradenton, Fla., to participate in the USA Baseball Breakthrough series training camp, where he received mentorship, video coverage and scout evaluations.

Breaux was selected by MLB to attend the Commissioner’s Cup training camp this month, part of the 2018 All-Star week in Washington.

During his all-expenses paid trip, Breaux participated in an MLB home run derby and skills clinics with MLB partner groups. He’s enjoyed training under the direction of coach Lenny Webster, and he hopes to achieve a .500 batting average this upcoming season.

Henderson said Breaux and other traveling Wildcats are attracting attention.

Lonnie Ellis Jr., a rising ESJH junior, was ecstatic when his parents, sister and grandfather teamed together to send him to the Future Prospect Scouting team in Florida.

Ellis has proved himself a strong pitcher and utility player under the instruction of MiLB veteran Miguel Pereira. He recently played games in a two-week tour of Puerto Rico and he’ll soon participate in the Perfect Game USA showcase for 2020 class recruits.

“I’m trying to get known and make it to the MLB,” Ellis said. “There were better opportunities for me here than in St. John Parish. I’m glad I get to play with top prospects from a lot of different areas.”

Ellis has played baseball since age 7, and he credits much of his development to prior coach Willy Martin.