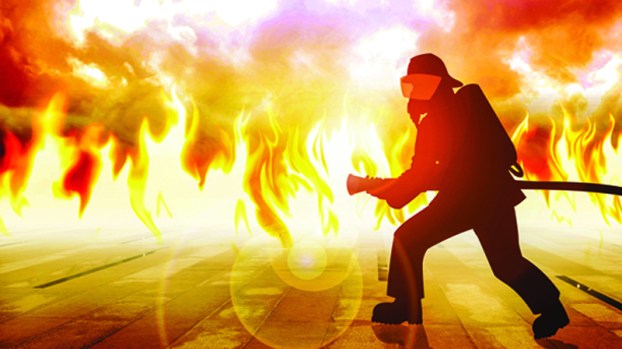 LAPLACE — St. John Parish Office of Fire Services personnel battled the heat Sunday afternoon, taking a slow and steady approach to extinguishing a fire that resulted in the total loss of a camp at 175 Lakeview Dr. in LaPlace.

The structure, located near the boat launch down Peavine Road, was fully engulfed in flames upon arrival, according to Chief of Operations Cain Dufrene.

“We took our time, knowing we weren’t going to be able to save anything,” Dufrene said.

“The guys did a great job of protecting the surrounding swamp from exposure. Luckily, it was far enough down the road from other buildings, so there wasn’t much it could’ve spread to.”

A tanker truck was called in to shuttle water from the nearest hydrant on Airline Highway to the camp.

The operation involved six trucks dispatched at 3:25 p.m. and lasted past 7 p.m. No injuries were reported, and the two adult occupants residing at the camp were safely outside upon arrival.

According to Dufrene, the homeowner reported noticing the fire while performing yard work.

The cause of the fire was left undetermined given the extent of the damage.

Intense heat was another hurdle for personnel clad in thick bunker gear, according to Dufrene.

“They fight a fire, then they come out and don’t get any relief because you’re still in 100 degree weather,” Dufrene said.

“Luckily for us, they had shade trees, and the residents were really helpful.

“We bring our own bottled water, but even the restaurants down the road offered to bring some water for the guys.”

One of the homeowners posted to a St. John Parish community group to thank the responders for their service, describing personnel as “respectful, organized and very professional.”

Homeowners assured Fire Services they had a safe place to stay following the fire, Dufrene said.