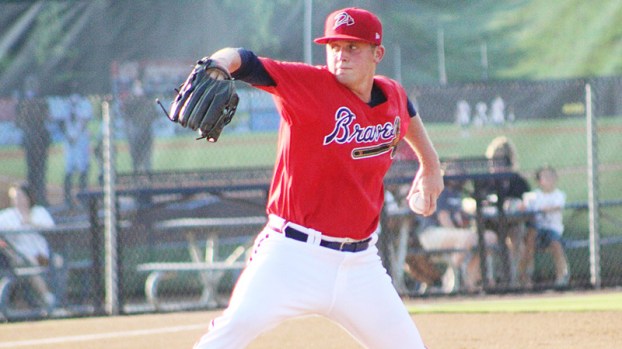 Following his collegiate career with the St. Edward’s University Hilltoppers in Austin, Texas, which included all-American honors and South Central Region Pitcher of the Year titles, LaPlace native Tanner Lawson, above, was drafted by the Atlanta Braves. He is pitching in the club’s minor league system, with a goal of making the Majors.

LAPLACE — LaPlace native Tanner Lawson grew up treating every fastball as a stepping stone toward Major League Baseball, but it wasn’t until college that he realized his wildest dreams were within reach.

When the Atlanta Braves selected Lawson in the 21st round of the 2018 MLB draft, it felt like the crowning moment of a lifelong goal.

“I was fine with joining any team as long as I got drafted,” Lawson said.

“My plan was always to play at a professional level. The Atlanta Braves were the ones to give me the chance.”

Lawson played baseball for Lake Pontchartrain Elementary and Riverside Academy until his family moved to Texas at the end of his sophomore year. Upon finishing high school, he pitched for the University of Houston and St. Edward’s University.

He still has a tall hill to climb to pitch a Major League Baseball inning, needing to first navigate the ranks from advanced rookie ball through AAA in the minor leagues.

Lawson said his status as a left-handed pitcher gives him a shot at success. Each pitch he throws steers away from right-handed batters, making contact difficult.

Former Riverside Academy coach Matt White has kept in contact with Lawson since the day he left Louisiana. He said Lawson stood out from other talented lefty high school pitchers with his phenomenal split finger fastball.

When White received an excited call from Lawson during the MLB draft, it didn’t come as a surprise.

“He’s just a great, Christian guy from a good family.”

He’s a three-time all-American and South Central Region Pitcher of the Year with a 2.75 earned run average.

“It’s a success story come to fruition,” Penders said. “He’s a great kid who has come a long way, and it’s been fun to watch. I think he can have a long career with his breaking ball pitch.”

Lawson heads to the baseball field each afternoon and starts stretching at 2:15 p.m. in preparation for 7 p.m. games, which typically wrap up around 10:30 to 11 p.m.

With the Braves, he’s traveled to Florida, Virginia, West Virginia, North Carolina and Tennessee thus far. He’s practically living out of a suitcase, and embraces the freedom that comes along with it.

“I enjoy being able to compete every day and not being stuck behind a desk at a 9-to-5 job,” Lawson said.

He encourages children with professional baseball dreams to never stop playing, even if the odds of success look slim.

“This is a sport you fail at every day,” Lawson said.

“The best people in this game are really good at failing and getting back on track. If you don’t like how you’re doing, play better.”