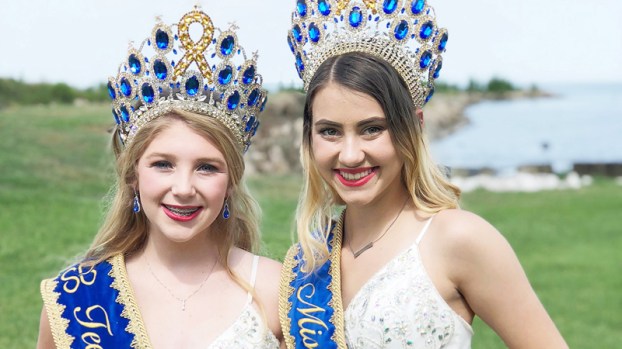 2017-18 Ray of Life Teen Grace Vicknair and Miss Tori Jones have traveled to various pageants and donated to pediatric patients across the state.

RESERVE — The Ray of Life Pageant first shined its light in 2013 as a fundraiser for Tyler Cambre of Reserve as he battled an astrocytoma brain tumor.

What was meant to be a one-time occasion steadily developed into an annual event providing thousands of dollars in donations to pediatric cancer research, according to co-director Lacey Volion Peckhaus.

Themed “I dream of a cure,” the 6th annual Ray of Life Pageant is being held from 1 to 8 p.m. July 28 at St. Peter Catholic School in Reserve.

Peckhaus said contestants are in great demand, and entrants of all ages are accepted.

Children, mothers and grandmothers each have a shot at winning a crown on stage.

“We don’t want anyone to feel excluded, and we don’t want to turn away anyone who could help us donate to our cause,” Peckhaus said.

In past years, proceeds have been sent to the Pediatric Cancer Research Foundation. In an effort to localize the impact of funds, donations are now directed to St. Baldrick’s Foundation.

Entry fees for contestants are $55 for children up to 12 and $75 for girls and ladies ages 13 and up. Advance registration is strongly preferred.

The Ray of Life Pageant lineup includes a children’s pageant in the early afternoon, followed by the Miss Teen division for ages 13 to 16, Miss for ages 17 to 23, Ms. for ages 24 and up, and Classic Ms. for contestants with grandchildren.

Teen, Miss and Ms. contestants begin an interview process at 10 a.m. and introduce themselves on stage at 5 p.m.

Visiting queens pose during a previous Ray of Life Pageant. The annual event has raised thousands of dollars for pediatric cancer research since 2013.

Admission to watch the pageant is only $5, Peckhaus said, though additional donations are always accepted.

The 2017-18 Teen Miss Ray of Life Grace Vicknair, 14, said she is dreading giving up her crown because it marks the end of a once-in-a-lifetime experience.

Over the past year, she and Miss Ray of Life Tori Jones have traveled to various pageants, donated to Toys for Tots, collected and delivered toys to pediatric patients at Hope Lodge in New Orleans and supported local 9-year-old Macy Guidry’s cancer fight.

“The crown is very important to me because I’ve always wanted to do something more,” Grace said.

“You’d never expect you could make such a big impact for a good cause.”

Grace’s mother, Brandi, stayed involved as Grace traveled and made new friends. She described Ray of Life as a rewarding, feel-good organization.

Jones said the Ray of Life Miss title extends beyond the crown.

“That’s something I hold really close to me. I didn’t compete over how the crown looked. I thought, ‘wow, who wouldn’t want to represent all of the kids fighting against pediatric cancer?’”

Interested contestants should connect with co-director Candace Hoover through the Ray of Life Organization Facebook page to receive registration forms.