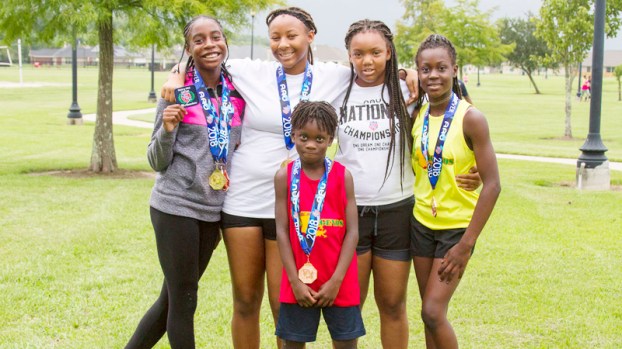 Zha’Nell is a member of the St. John Legends Track Club, a local group that has traveled the country for the past five years, competing against elite teams.

The Legends placed 68th at the AAU National Club Championships among 309 teams representing all 50 states and eight countries, according to head coach Mark Creecy.

The local squad now sets its sights on the track and field portion of the 52nd annual Junior Olympic Games, scheduled July 29 to Aug. 3 at Drake University in Iowa.

“The national championships in Orlando was a qualifying event for the Junior Olympics, which we started going to about five years ago,” Creecy said.

“We got 11 medals in Orlando, and we had a few who did not receive medals but still qualified to go to Iowa by scoring in the top 8.”

The 12-year-old category was well represented, with Zha’Nell taking home three medals for performances across field events and Aja Creecy earning bronze in the shot put and discus.

At 4 years old, Cori was the youngest competitor in the 55-meter dash, the 100-meter dash and the long jump.

Aja Creecy, pictured practicing with a javelin, is coming off a bronze medal showing in the shot put and discus.

While coaching an AAU track and field group in St. Charles Parish, Creecy noticed a lot of young athletes joining the team were from St. John Parish.

“I saw there was a lot of talent out here in LaPlace that needed to be serviced,” Creecy said, adding the St. John Legends team was later formed in 2013.

He’s impressed with the rate of the team’s development in the years since.

“I’m proud of them going up against some of the finest teams in the country,” Creecy said.

“They’ve been practicing at a lot of different venues. This year, we did well in the high jump, and there was really no place to practice the high jump except by going to Destrehan.”

The young athletes have worked hard year-round, not only in track and field, but also in fundraising for trips.

More than 40 graduated track members received St. John Legends scholarships that have allowed them to pursue a college education and track career.

LULING — With a college swimming career at Ouachita Baptist University right around the corner, Alex Noel of LaPlace was... read more