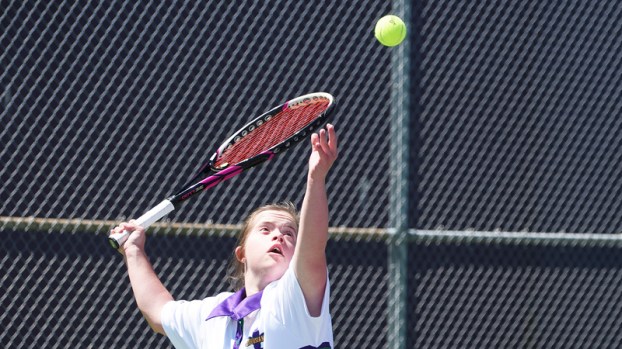 SEATTLE — Paige Faucheux of Lutcher is living proof that Down syndrome does not limit an individual’s capacity for success.

Paige, 20, is a recent college graduate of Nicholls State University’s first Bridge to Independence program. For the past two years, she’s taken classes, completed internships and met lifelong friends in the Delta Zeta sorority, all while living independently in a campus dorm.

Paige’s life goes beyond typical and crosses the threshold of exceptional.

This month, she and longtime friend Kristin Bourgeois joined forces in unified tennis doubles and won bronze medals at the 2018 Special Olympics USA.

Hosted in Seattle, Washington, the event saw competition from more than 3,500 qualified Special Olympics athletes from all 50 states.

A bronze medal is placed around the neck of St. James Parish’s Paige Faucheux, who earned the honor with partner Kristin Bourgeois at the Special Olympics in Seattle, Washington.

Paige, who also won a bronze medal in tennis singles, grew a love for the sport after starting private lessons at age 13. She enjoyed attending Special Olympics USA and trading pins with other tennis teams from around the country.

“I like to travel a lot and meet new people in other states,” Paige said. “Playing with Kristin was really awesome. She’s been helping me out a lot on the court.”

According to Paige’s mother, Lisa Faucheux, Special Olympics unified sports break down social barriers by joining people with and without intellectual disabilities on a team.

Paige and Bourgeois met at Lutcher High School. After Bourgeois graduated in 2014, she helped coach Paige through her junior and senior years on the Bulldogs tennis team.

Upon reaching college, Paige discovered the Special Olympics through a qualifying event hosted at Nicholls.

According to Paige’s father, Wade Faucheux, a coach was impressed with her talent, and she went forward to participate in matches and a training camp testing her skills and independence.

When asked who she’d want to select as a unified partner, Paige chose Bourgeois.

“It was an adjustment at first because Paige and I had never played together,” Bourgeois said.

“We had to get to know each other on the court, and it ended up working out really well.

“We were both really excited to have that experience, and I hope we can do it again in four years.”

Bourgeois, also a 2018 Nicholls graduate, described Paige as outgoing and funny, with a cheerful nature and a good heart.

“I started working with [Upside Downs founder] Mr. Beau Brooks,” Paige said, adding she wants people to know that “anything is possible” for people with Down syndrome.

According to Lisa Faucheux, Upside Downs promotes awareness of what people with Down syndrome can accomplish.

“They deliver baskets to couples that have a baby with Down syndrome, trying to change the outlook and let them know they can still function and live a typical life,” Lisa Faucheux said. “They can go to school and go to college. Paige has her driver’s license and a job in Thibodaux. We’re working on getting her a car to drive to work.”