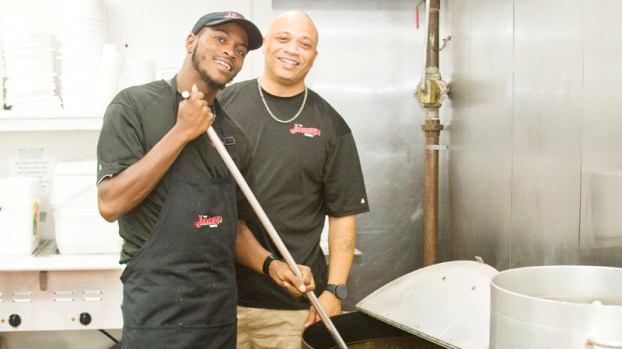 Theron “Bill” Traywick stirs the jambalaya pot while co-owner David Brown watches on. The Jambalaya Shoppe is celebrating one year in business this month.

LAPLACE — Since its July 2017 opening, The Jambalaya Shoppe of LaPlace owners say the restaurant has delivered consistency in taste and service excellence to all customers.

Jambalaya, gumbo, red beans and other Louisiana favorites are cooked fresh every day at 150 Belle Terre Blvd., Suite G, and location owner David Brown expects the restaurant will be a local staple for many years to come.

He and his wife, co-owner Creshell Brown, met The Jambalaya Shoppe franchise founding family, including Cheryl and son Andy Fontenot through a youth baseball team.

David, an experienced restaurant manager with a love of cooking, gladly accepted an opportunity to operate a new location.

The only question left was where to open. The Browns agreed St. John Parish “just felt right.”

“LaPlace seemed like the perfect fit, and so far it has proved to be,” David said. “We have family that has lived here for 20-plus years. It’s a growing area, and the people here have welcomed us.”

To celebrate the restaurant’s one-year anniversary, the Browns are tapping in to residential deliveries to reach a greater number of people.

St. John residents will soon have the comfort of home cooked meals delivered to their front doors with the addition of Waitr services, which should become available within the next month.

According to David, The Jambalaya Shoppe also delivers lunch orders to local businesses upon request.

It’s part of an effort to remain involved, something Creshell said the restaurant has aimed for since opening.

Over the past year, The Jambalaya Shoppe has catered and donated food to school functions, including the St. John Parish honor roll round up.

Students who achieve all As or A/B honor roll can receive meal discounts year-round through the St. John schools’ Gold and Silver Card Rewards Program.

Creshell, who also works for Louisiana state government in Baton Rouge, said getting to know customers is the best aspect of running a restaurant.

“Customer service is my field,” Creshell said. “I’m most passionate about talking to people and greeting people so I’m able to call them by name whenever they walk through that door again.”

According to David, The Jambalaya Shoppe’s homey atmosphere has become a place for people to meet with friends and talk for hours.

Customer Lance Gremillion agreed, telling the Browns on Friday that The Jambalaya Shoppe is a “gold mine” capable of surviving in a competitive marketplace.

David said The Jambalaya Shoppe came in as an underdog, and he’s happy to have gotten positive community reception.

“We’ll stay consistent and faithful, and I know God will see us through if we keep doing the right thing,” David said.

St. John 4-Hers make their marks in Baton Rouge

BATON ROUGE — Coy Vedol served on the state executive board for Louisiana 4-H this past year. The St. John... read more