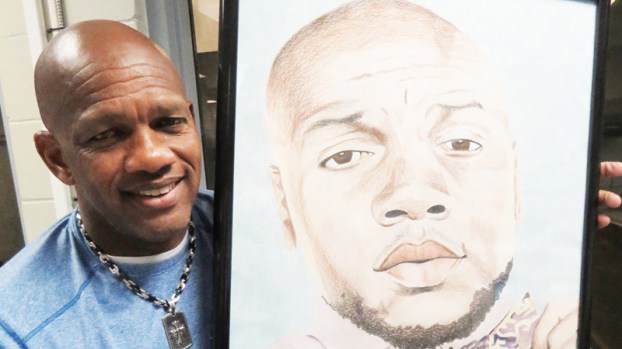 Greg Joseph, the father of former West St. John High head baseball coach Juan Joseph, who was killed in 2014, holds a poster of Juan that is placed in the school’s gym.

EDGARD — When a challenging game shifted into an unexpected victory for the West St. John High baseball team during the 2018 playoffs, coach Greg “Buck” Joseph felt his fallen son by his side in spirit and in heart.

With each game he coaches, Buck strives to achieve Juan Joseph’s dreams.

Juan was slain by gunfire while diffusing a verbal altercation outside a Baton Rouge nightclub in November 2014, but Buck said his son’s vibrant spirit continues to touch people near and far.

“It’s a great honor to know that enough people outside of my family saw something in our son to decide to name a park after him,” Buck said. “It’s easy for parents to see it in their son, but it’s a lot better when other people feel it.”

Head baseball coach and assistant football and basketball coach for West St. John at the time of his death, Juan was a standout student athlete with a 4.1 GPA and numerous football accolades.

He led the Rams to football state titles in 2003 and 2004, going forward to pass for more than 9,200 yards and win three consecutive Southern Collegiate Athletic Conference Player of the Year awards at Millsaps College in Mississippi.

In 2008, Joseph won the Conerly Award, recognizing him as the top college player in Mississippi. He graduated with a bachelor’s degree in business and a masters in management, and his name and picture are listed in the Mississippi Sports Hall of Fame and Museum.

According to Buck, Juan turned down private sector career offers to return to West St. John, where he instilled “character, pride and guts” in the young athletes he coached.

Councilman Kurt Becnel said he was pleased to announce Juan Anthony Joseph Park, adding there will be a ceremony in the coming months to unveil new signage.

According to Bencel, St. John Parish Assessor Lucien Gauff III initially proposed the park dedication during his time on the Council.

Gauff said it’s important to honor Juan because of the shining example he set for St. John residents.

“This young man lived an exemplary life,” Gauff said. “He was a scholar student, a great athlete and he’s from our community. He came back home to serve us.”

Buck and his wife, Elizabeth, have overseen the Juan Joseph Memorial Foundation since their son’s death, donating more than $13,000 for West St. John High scholarships and athletics.

During Tuesday’s Council meeting, Elizabeth thanked the attendees for supporting her family and shared they are anticipating going to trial in November against Juan’s alleged shooter, who is facing a second degree murder charge.

“It’s been a long time, and we still haven’t put the person behind bars that shot my child and took his life,” Elizabeth said. “We’re patient with the judicial system, and we recognize that things have to be done in order with the law.”

St. John the Baptist Parish All District for baseball, softball