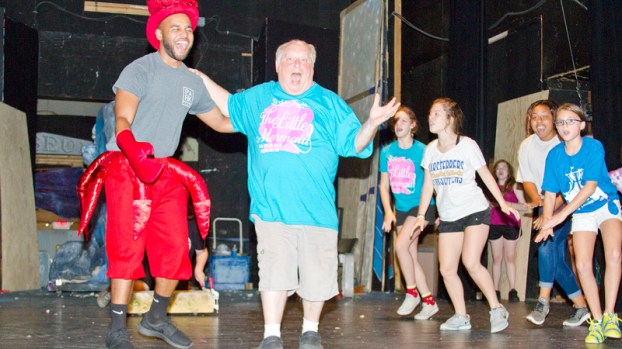 Jared Tregre, Sebastian in St. John Theatre’s rendition of “The Little Mermaid,” sings “Under the Sea” alongside director Mike Brooks as Peyton Dunshee, Keri Clement, Jada Bown and Olivia Reeves dance in the background. The show runs July 20-22 and July 25-28 at St. John Theatre in Reserve.

Join us for ‘Under The Sea’ adventure: Cast of more than 40 ready to perform ‘The Little Mermaid’

RESERVE — Performers grow as artists at St. John Theatre in Reserve, learning to shine on stage, collaborate or craft detailed sets and costumes.

Summer musicals stand apart from fall comedies and dramas in terms of community participation, according to director Mike Brooks.

“We’ve been here since 1981, and we have a lot of involvement because people look forward to our summer musicals,” Brooks said. “All these kids want to be involved. They help with construction, climbing on ladders, paper mache and whatever else needs to be done.”

Brooks said classic musical numbers including “Part of Your World,” “Under the Sea” and “Kiss the Girl” bring energy to the performance when the audience can’t help but sing along.

Jared Tregre said he enjoys portraying Sebastian in the musical because it gives him a chance to step into a story he’s known since his childhood.

Choreographer Abbie Shull said there are elements in “The Little Mermaid” musical absent from the animated movie.

“With movies, there’s more songs at the beginning, and then it drops off,” Shull said. “Ours doesn’t slow down. It keeps building bigger and bigger.”

In addition to choreographing dance routines, Shull plays the role of Ursula. Shull holds two decades of experience in theatre, having started acting at age five, and she’s watched countless people grow up on the stage.

“As choreographer, I appoint dance captains, and a lot of them have been participating since they were little kids,” Shull said. “Now they’re stepping into leadership positions. For kids, this really provides an opportunity to work as a team and become a well-rounded artist.”

St. John Theatre’s Ariel, played by Logan Tauzin, has participated in theater since she was 5 years old. Rehearsing and performing among friends is her way of stepping out of herself, and she’s sure the audience will feel the same energy she does while on stage.

According to Brooks, St. John Theatre musicals have large casts and strong ensembles. Though “The Little Mermaid” includes 20 roles, parts were allocated for a cast of 43.

“Our mission is to bring theater to the people of St. John Parish and the surrounding parishes, and I try my hardest to use those who audition if I can,” Brooks said. “Kids get a taste of theater through the public schools, but this is where they get to be up on the stage and have a big crowd cheering them on.”

Tickets are $15 for adults, $12 for seniors and $10 for children ages 12 and under and may be purchased at the door or at Allied Express in LaPlace. Seats can be reserved through ticket orders at stjohntheatre.com.

St. John Theatre was constructed as a movie theater in the 1930s, later shifting to a live performance stage in 1981 after a feasibility study cited the need for a St. John Parish cultural center.