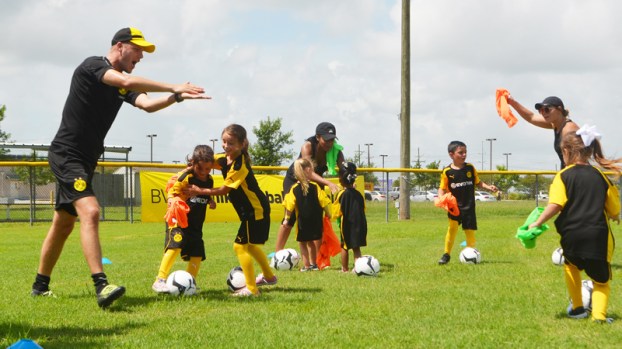 Axel Grunebaum, left, does his best alligator impression Monday in Reserve while working with local youth.

Kids get kick out of children’s camp for Evonik employees

RESERVE — Christian Diercks enjoyed a memorable experience during a recent meal at Frenier Landing, speaking excitedly about it a day later with a local reporter.

“We saw an alligator,” Diercks said. “Is that something you run into a lot?”

Diercks, a professional youth trainer with German professional soccer team Borussia Dortmund, or BVB, was in Reserve Monday with two other professional trainers hosting a youth soccer camp for children and grandchildren of Evonik employees.

Evonik has locations in Garyville, Reserve and Westwego, employing approximately 250 people. Evonik has served as BVB’s chief sponsor since 2007, a partnership that brings international attention because the Evonik name is displayed across the players’ chests on the team uniform.

BVB competes in the top German soccer league and routinely plays across the globe, including several matches planned this summer in the United States.

That connection also allows for some good-natured family fun, like this week’s youth camp in St. John the Baptist Parish, which had little to do with technical skills and a lot more to do with fun and exercise.

“The passion is here, but of course there is a different performance level,” Diercks said during a break in Monday’s action. “Some of the kids here just started and some have never played before.”

Diercks said his goal, whether in training his squad’s next generation of professional talent or just playing with children, extends well beyond the field.

“We try to develop everything, from observation skills to reaction skills and promoting a problem-solving attitude and mentality,” he said.

He and his colleagues — Markus Pasdzior and Axel Grunebaum — also take a little bit of where they are when incorporating local training. Grunebaum had plenty of fun Monday pretending to be an alligator, playfully chasing local children as they ran through drills on the soccer pitch — in this case, the baseball outfield in front of REGALA Gymnasium.

Evonik Communications Manager Robert Brown said it’s an exciting time for the company, making it a perfect time to do something nice for employees while continuing to build the brand.

“We’ve been in Garyville a long tome and just added the Reserve site in January of 2017,” Brown said. “Folks who work here do a great job and are good representatives of Evonik.”

Evonik’s Garyville site celebrated 30 years of manufacturing in 2017. During the three-decade celebration, it was noted Superabsorbents, the latest generation of which are made in St. John the Baptist Parish, can absorb 500 times their own weight in liquid and retain it even under strong pressure.

Almost every diaper manufactured contains a few grams of these granulates, and the granulates in every fifth diaper come from Evonik.

The Garyville site started out as a part of Nalco in April 1987. It was sold to Stockhausen in 1996. Stockhausen later became part of Deguss, and, in 2007, was renamed Evonik Industries.

LAPLACE — Much like real piranhas, the Belle Terre Swim Team travels in a pack, each member playing a vital... read more