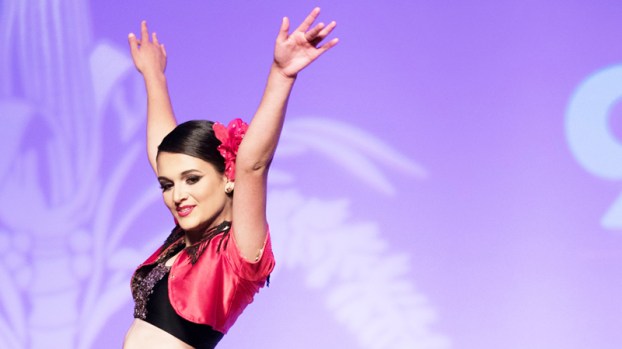 PAULINA — Breleigh Ann Bentivegna has got moves, she’s got determination and she most certainly has the hardware.

The 16-year-old rising senior at St. James High School has been a competitive dancer since she was 6 years old. She became an independent soloist last year, specializing in tap, and earning several scholarships to attend classes in New York and Boston.

She was definitely in her comfort zone during the recent Louisiana Farm Bureau Federation Convention in New Orleans, where she performed a Matador-style tap dance to the Flamenco tune “Hanuman” as part of the talent show.

“I absolutely love tap, and it’s innate for me, it’s in my soul,” Breleigh said. “I think I’m oblivious to the fact that my feet are constantly tapping, even in the classroom or church. Before every performance, I tend to get a little anxious, but as soon as my music starts, those nerves go away and I absolutely love being under the stage lights.”

Before taking the stage, Breleigh reminds herself, “I can do all things through Christ who strengthens me.”

Parents John and Robin Bentivegna recognized their daughter’s love of dance from an early age.

They nurtured the talent, building her a studio in their Paulina backyard so she could practice. The goal was simple: become the best she could be.

Naturally, becoming a professional dancer was her focus for several years.

Breleigh Ann Bentivegna says she often trains twice a day in her home studio to maintain her stamina.

She is in the studio pretty much every day, sometimes practicing twice to keep her stamina up due to the fast and upbeat nature of her solo routine.

“As I got older, even though I will always have a love for tap, I’ve decided after graduation, my goal is to attend Southeastern Louisiana University as a nursing major,” Breleigh said. “Because of my love for children, I wish to specialize in pediatric nursing.”

Stepping out of the familiar world of competitive dancing won’t be too much trouble for Breleigh, who was Teen Miss Festival of the Bonfires XVIII and traveled throughout Louisiana visiting fairs and festivals in representation of St. James Parish.

Breleigh has two older brothers, Duane and Joshua Brignac who each live in Texas, and a younger sister, Baileigh, a rising ninth grader at St. James High School.

She also has a nephew and three nieces.

Father John, originally from Tickfaw, moved to St. James Parish as a teacher and a softball coach at Lutcher High School, winning a state title in 1998.

Mother Robin, born and raised in St. James Parish, grew up on a farm, working with Perique tobacco, cows, chickens and homegrown vegetables. After working more than 38 years, she is retired from the Motiva Convent Refinery.