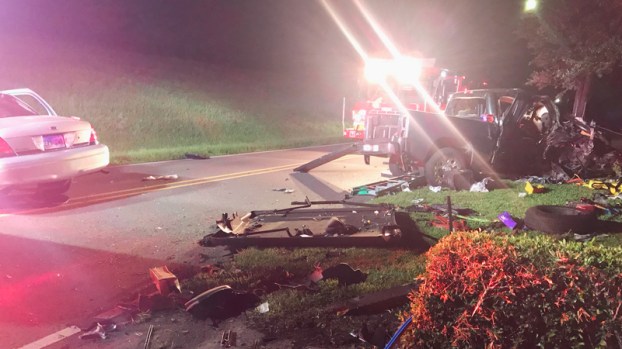 Authorities responded to the scene of a head-on crash Tuesday night along West 2nd Street.

LAPLACE — A local man was killed Tuesday night, the result of injuries suffered in a two-vehicle, head-on collision along West 2nd Street in LaPlace.

The crash occurred shortly before 9 p.m. as 54-year-old Curtis Edwards of LaPlace was driving a Chevrolet Silverado east on West 2nd Street with Heard in the passenger’s seat, authorities said.

As the Silverado turned left onto Fir Street, it crossed into the path of a Ford Crown Victoria traveling west on West 2nd Street. According to State Police, Larry Eugene, 41, of Reserve was driving the Crown Victoria “without headlights and at a high rate of speed.”

Emergency services work to free the occupant of a Chevrolet Silverado in LaPlace.

The Ford struck the Chevrolet on the passenger side. Emergency medical response transported all occupants to University Medical Center New Orleans with serious injuries.

Heard later died at the hospital as a result of injuries sustained in the crash.

Charges are pending, according State Police, who acknowledged an investigation is ongoing.

Impairment is not suspected on the part of Edwards.

Following the wreck, State Police stressed Louisiana law requires headlights to be used by drivers any time between sunset and sunrise.

PAULINA — Breleigh Ann Bentivegna has got moves, she’s got determination and she most certainly has the hardware. The 16-year-old... read more