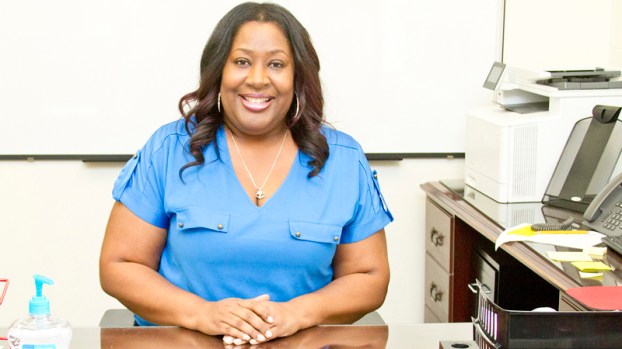 Having served as assistant principal for LaPlace Elementary since May 2016, she’s helped organize parent nights to provide easier access to educational resources.

“I want to improve upon our relationship with the community and make sure parents understand the standards we use for testing,” Jones said. “That way, they’ll know how to support their kids and help push them as they work to meet their goals.”

Goal setting will be promoted among students, teachers and administrators this year, according to Jones.

Drenean Brown and Zina Jones go over their plans in advance of the 2018-19 academic year.

This summer, she and her team of assistant principals are studying state testing data to identify strengths and deficiencies among students. Jones said children would review their spring LEAP scores during the first week of school and set a goal for improvement.

“They’ll look at how many points they are from the next level up, and we will make a plan for what they need to do to make that goal,” Jones said. “They’ll sign off on it, almost like a contract. We’ll check with them throughout each nine weeks to see the progress and if there’s anything we need to tweak.”

“I was very excited to be placed here this year to be her assistant principal because Ms. Jones and I had a great working relationship at Garyville, and our kids grew a lot,” Brown said.

“She was always about the kids and what was best for them. She has such a great vision of where she wants to see kids go.”

“Everybody here will be a VIP – a very important piece,” Brown said. “I think it’s such an important thing to say everyone is an integral piece to the puzzle in building our success.”

According to Jones, LaPlace Elementary stands out in diversity of extracurricular activities and student experiences.

Students will travel through Beta Club and 4-H, among other groups, while book club, culture club and Pokémon club allow children to connect with peers who have shared interests.

LaPlace Elementary offers six accelerated courses for high school credit, with French and computer literacy new to the curriculum in 2018-19.

Jones said the Tiger team is prepared for a “phenomenal” school year, adding her seven years of assistant principal experience at LaPlace, Lake Pontchartrain Elementary and Garyville Magnet has prepared her for the new role.

Her favorite part about working in education is seeing children add a joyful mood to a dismal day with something as simple as a smile or a hug.

LaPlace Elementary School is located at 393 Greenwood Drive in LaPlace and educates more than 1,000 students in kindergarten through eighth grade, according to the school’s website.