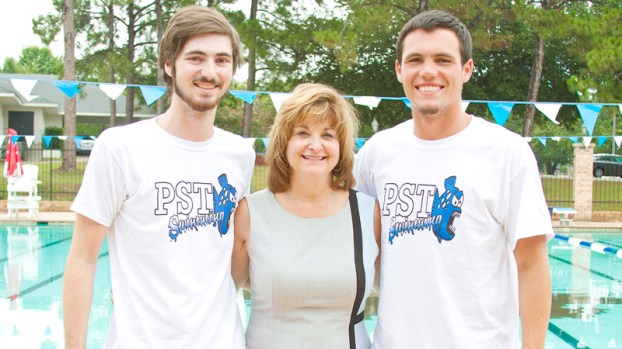 LAPLACE — Much like real piranhas, the Belle Terre Swim Team travels in a pack, each member playing a vital role in achieving team goals.

They practice for perfection on weekday mornings, swim in the Jefferson Community Club Association league Tuesdays and Thursdays and end the week with Friday family cookouts.

Instituted approximately five years ago, family cookouts are a chance to build camaraderie and formally present ribbons from the week’s meets, according to Piranhas Swim Team director Natalie Tatje.

“The parents get to know one another, and the kids get to spend time with other kids not in their age group,” Tatje said. “It’s about creating a family atmosphere.”

The Piranhas are a family, and a big one at that.

Ashley and Elyse Shenton are seen having some fun on Donut Day.

They boast the fourth largest team of the 12 that compete in the JCCA league, which includes programs from larger cities like Metairie and Kenner.

However, Tatje said size won’t be a factor in the July 24 Meet of Champions, an invitational encompassing only the top two performers per team in each event.

Belle Terre swimmer Christopher Hammett broke records in the Meet of Champions the past two years, coming out on top in individual medley in the 11-13 and 13-14 age groups.

Tatje, who has overseen the swim team for 20 years, said skilled performers don’t tell the full story of a team’s strengths.

John Fuselier II and Belle Lauricella are all smiles.

“In swimming, no one sits on the bench,” Tatje said. “We emphasize that every swimmer counts. We want them to try to beat their own times and compete against themselves, as well as others.”

They have the advantage of being one of the few teams using starting blocks for diving, a mainstay in high school, college and professional swim programs.

“The kids come to practice every day and do what they need to do,” St. Pierre said. “That’s what matters. I think we’re one of a kind. We have a lot of diversity on our team, and we never say no to a challenge.”

Duhon, 18, works as an assistant coach while finishing out his final year as a swimmer on the team.

“I’ve been swimming here a long time, so I know a lot of the kids,” Duhon said. “I can be a coach and help them with their strokes while at the same time being a person they know they can come to if they need anything.”

The final regular meets of the season take place at 6:30 p.m. Tuesday at Green Acres Country Club and July 17 at Elmwood.

The Meet of Champs will be held from 2 to 9 p.m. July 24 at Woodlake Swim & Tennis Club in Kenner.