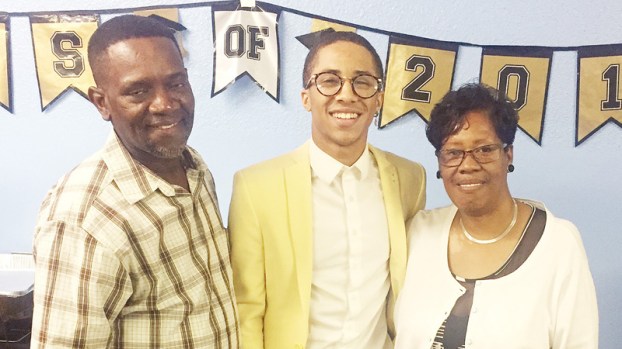 DeI’ray Ceaser, center, stands with Doyle Coleman and Cybra Coleman, who he says played a part in shaping him into the person he is today.

RESERVE — Recent East St. John High graduate DeI’ray Ceaser strives to follow in the footsteps of Elon Musk and other business visionaries who have propelled society toward technological advancement.

Fueled by curiosity, Ceaser is a philosopher, a planner and an incoming freshman at Morehouse College in Atlanta, Martin Luther King Jr.’s alma mater.

He plans to study computer science and minor in business marketing, with ambitions to own a programming company.

“More-house has a reputation for being one of the top historically black colleges that shape the men who go there into successful businessmen,” Ceaser said. “There’s a lot of well known alumni like Spike Lee and P. Diddy, and when I visited, there was such a homey and welcoming atmosphere.”

Ceaser has already earned more than 30 college credits – enough to classify him as a sophomore – and boasts experience with basic computer coding and metadata.

Ceaser plans to earn his doctorate, but not before traveling to Japan for a year of studying abroad.

“I’m taking Japanese my freshman year to prepare for it,” Ceaser said. “Japan has always been an interest of mine, growing up watching anime, and it’s known as a mecca for technology.”

When he’s not learning HTML, CSS and Java, Ceaser takes interest in recording music with friends and tracking fashion trends.

During eighth and ninth grade, Ceaser lived in California and worked as a child actor, appearing in Lunchables and Lenovo computer commercials.

His aunt Neyuka Ceaser said his dancing made him the life of the party at prom, adding his personable nature carries over into his interactions. She said her nephew also knows when to be serious.

“I’m so proud of him for his attitude and the way he strives every day to succeed,” Neyuka said. “He’s well mannered and straightforward. Even though he grew up without his mom and dad together, he’s never given up.”

Growing up in a single-parent household with mom Delilah Ceaser and younger siblings Caige Lee and Coyal Gray Jr. instilled a sense of independence.

“I’ve had support from my family and friends, but I was always my own drive,” Ceaser said. “Being by myself a lot, I pushed myself to know that if I want things, I need to do it.”

Ceaser achieved a lot during his time at East St. John High, graduating fourth in his class with a GPA higher than 4.0 and a 29 on the ACT. He led the school in J-points, a reward system based on grades and behavioral records, and he was the recipient of the 2018 Kacen Charles Community Foundation scholarship.

He also dabbled in sports by adding varsity baseball and powerlifting to his senior year schedule.

RESERVE — Katie Klibert of Reserve Telecommunications thought she knew the basics of self-defense. Her perspective changed when she and... read more