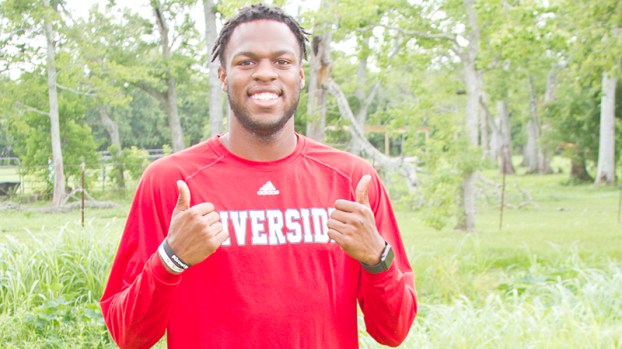 Jalen Banks was awarded prom king, athlete of the year, most school spirit and most likely to dance in a Beyoncé music video.

The 2018 Riverside Academy graduate wants his class to see him as reliable and personable, with a positive attitude strong enough to keep everyone upbeat.

Jalen Banks finished his senior season with 30 catches for 515 yards and six touchdowns. He was also a contributor on the track and basketball teams.

At graduation, Banks was the sole recipient of the Principal’s Award, which his mother Elanda Banks said represented consistency of character in and outside of school.

Banks left a lasting mark on the Rebels’ football, track and basketball programs, regularly achieving all district, all metro and all state honors.

A powerful football season as wide receiver and defensive back led to numerous college offers, and Banks said he was fueled by the energy of his peers.

“The environment, as a whole, was unbelievable,” Banks said. “Hearing the fans cheer on Friday nights and talking to everyone during the week about the big game gave me chills and made me want to do all I could to make them happy.”

Track was his second favorite. After overcoming a hamstring injury at regionals, Banks won a state title in the 400 meters, blazing to a finish of 49.23 seconds.

In basketball, Banks was part of a senior dream team that advanced to state semifinals.

A lot of people expected Banks to continue his football career at the United States Military Academy at West Point, but Banks decided he’d rather dive into college focused on academics.

In the fall, Banks is attending the University of Southern Mississippi to study kinesiology. That focus stems backs to his freshman year of high school, when Banks was sidelined with a torn ACL. The injury and recovery cultivated an interest in physical therapy.

“Watching the guys be so enthusiastic with helping me get back to playing sports inspired me,” Banks said. “That’s what I want to do – help kids and athletes get back to doing what they love.”

Elanda Banks said her son is a principal’s list student and a responsible decision maker.

“I’m proud of all the great things he has done with his life so far,” Elanda said. “I admire the work, the commitment he puts in and, most of all, his smile in doing it. Because of who he is, he doesn’t meet a stranger. If they are strangers when he meets them, they won’t be when he leaves them.”

Part of Banks’ reasoning for staying closer to home is rooted from his senior trip, when he had to call fellow 2018 graduate Nick Rose’s father after the teen was struck by a vehicle and left in critical condition.

“I have family in Mississippi, and I don’t want my parents to worry about reaching me in New York if something happens,” Banks said.

Banks said studying technology as a minor is another option.

He fixes computers, volunteers on the Geek Squad team for Best Buy and serves as the sound and audio technician for Berean Christian Fellowship in Kenner.

Banks volunteers with his father, Joseph, as part of a community action group. His community work has included packaging Second Harvest food donations and serving on the Hurricane Isaac River Forest Disaster Committee.

(Editor’s note: This story has been updated to correctly list the contact information for potential contestants for this year’s pageant... read more