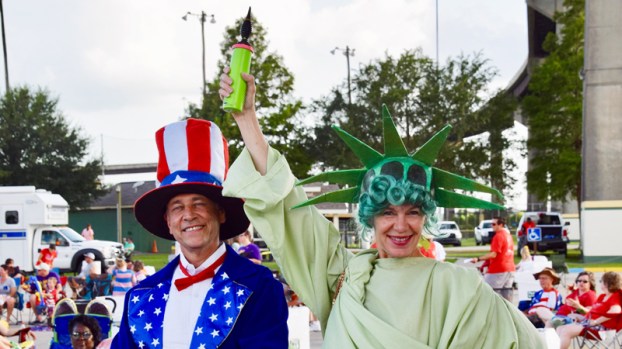 A balloon twisting Uncle Sam and Statue of Liberty join patriotic spectators at the 2017 Independence Day Celebration beneath the Hale Boggs bridge in Luling.

A fireworks show follows the performance at 9 p.m.

Groovy 7 is a diverse corporate party band specializing in the top 40 hits as well as classics. The band has opened for Kelly Clarkson, Carrie Underwood, Pit Bull, Flo Rider, Luke Bryan, Steven Tyler, Kiss and Rod Stewart and was awarded the best of weddings band in New Orleans for 2016 and 2017.

In addition to the band, there will be two balloon-twisting Uncle Sam clowns and a minature golf course donated by Logan’s Little Greens for children to enjoy. The band is scheduled to begin at approximately 6:25 p.m. with a 20-minute fireworks extravaganza beginning at 9 p.m.

An opening ceremony featuring a flag-raising by a local Boy Scout Troop, the national anthem and the recitation of the parish’s Independence Day proclamation and opening remarks by Parish President Larry Cochran will begin at approximately 6:15 p.m.

No alcohol will be sold. However residents may bring their own alcohol. No glass bottles are allowed in the park.

Pets, glass bottles and poppers are NOT allowed within the West Bank Bridge Park; however, guests are allowed to bring their own adult beverages, ice chests and folding chairs to the event. In addition, the state fire marshal has ordered that no one be allowed to enter or leave the park for up to 30 minutes before and after the fireworks show.

The West Bank Bridge Park, including the parking lot near the levee, will be closed the afternoon of July 2 in anticipation of this event, and the public is NOT allowed to use the bike path, drive or walk past barricades present near the levee during fireworks setup.

HAHNVILLE — The St. Charles Parish Procurement Office is hosting an auction online at publicsurplus.com through June 29. Under the... read more