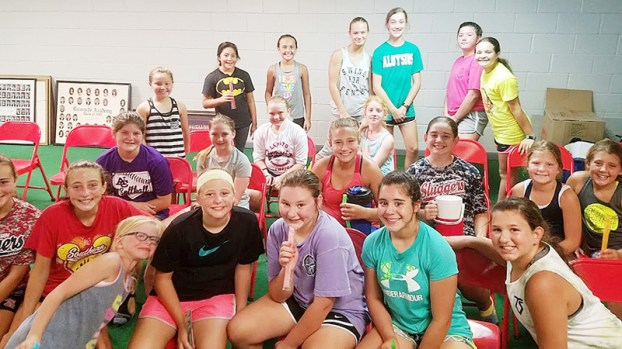 The camp began four years ago and has expanded since to serve numerous young athletes.

RESERVE — Louisiana girls softball is growing year by year, raising the level of competition and necessitating an early start to skill development, according to Riverside Academy softball coach Thomas Hymel.

Corinne Simon gets some swings in during a previous South Louisiana “Future Elites” Softball Camp, which is being led by numerous current and former collegiate players.

Open to girls ages 7 to 17, the camp covers all infield and outfield positions, hitting, pitching and catching in a small group format.

According to Hymel, Future Elites started four years ago, filling a void in a region with a notable lack of summer softball opportunities.

“In the St. John Parish area, there hadn’t been a softball summer camp in quite some time,” Hymel said. “Since we started ours, one opened up in the St. James Parish area. I think softball is a growing sport in South Louisiana, and camps are helping raise the overall skill level. We’re still behind states like California and Texas, but we’re getting better every year.”

He said parents are realizing a need to familiarize their girls with the sport at an early age so they can compete at the high school level.

“If they wait until high school, it’s too late and they’ll be left behind,” Hymel said. “They have to start earlier now because everyone’s skill is better.”

Regalo and Cifreo bring collegiate experience as former softball players for Southeastern and University of Louisiana at Lafayette, respectively.

Additional LSU players are expected to assist with the camp.

Watson, a 2017 graduate of Riverside Academy, has helped coach the camp for two years.

She loves seeing the girls excited and ready to learn, and looks forward to sharing her expertise.

Watson said each instructor brings years of experience to the camp.

“Any time you have someone come in with that experience, it benefits the girls and helps them reach a higher level within their game,” she said.

He said the diversity of the camp and the talented coaches allow the camp to grow.

Over the past four years, Future Elites has attracted participants from Baton Rouge, Mandeville, New Orleans and Morgan City.

Campers are asked to arrive each day dressed in athletic apparel, including cleats, with a bat and glove on hand.

Girls who register by Friday receive a camp T-shirt.