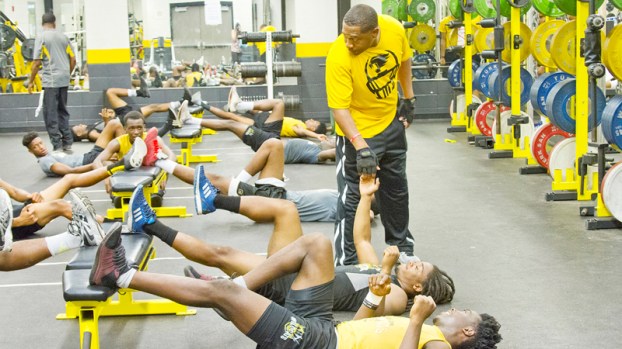 Currently, male and female athletes in all programs utilize the same equipment, splitting time between sports.

The volleyball girls arrive at 6:30 a.m. over the summer to clear out before the sizable football team piles in. Athletes in other programs exercise on the track when the training space is occupied, presenting a challenge on rainy days.

Brown took over in May, looking to generate excitement for a football program that has fallen behind the past three years while also promoting excellence across all Wildcats sports — in competition and in the classroom. Time constraints on training and conditioning imposed by limited assets hinder athletic programs and their student athletes from reaching their full potential, Brown said.

New athletic director Brandon Brown motions to an empty locker room that will be renovated to provide additional weight training space for athletes.

Superintendent Kevin George said the contract has gone out to bid, and the bidding process is expected to take three weeks. Once purchased, the equipment will be received and installed over a period of eight weeks, arriving as fall sports gear up.

Brown said the new additions include double weight racks and platforms designed for power clean lifts and dead lifts. Several single rack equipment pieces housed in the training room will be relocated to the old freshman football locker room, according to Brown.

Several pieces of single rack equipment will be reallocated to another space, while five new double weight equipment pieces are scheduled to arrive within the next eight to 11 weeks.

“We have extra space that isn’t being utilized,” Brown said. “The freshman boys have space to integrate with the varsity team. Once we take out the old lockers, we’ll have extra room so football, baseball, softball, basketball and volleyball aren’t all competing for that same space.”

Girls basketball coach Stasha James is excited for the changes because her team is typically pressed for time in the weight room.

“The football team spends a lot of time in the weight room because they’re so large, so we have to go whenever we fit in,” James said. “I think it’s great for the female athletes because it gives us opportunities to work in conjunction with and separate from the male athletes.”

Brown said newer equipment promotes safety, while adding racks allow more athletes to get the most out of practice time.

“The biggest thing is putting our kids in the best position possible to be successful,” Brown said. “I noticed we need to upgrade our equipment to make it more efficient for a 5A football program and have them prepared for the highest level of competition in Louisiana.”

Brown expects middle school sports programs to utilize the room, and he hopes to engage feeder schools so young athletes can ease into the learning curve that comes with transitioning to high school.

LAPLACE — Permission was denied to the owner of a tattoo parlor who is seeking to relocate his business to... read more