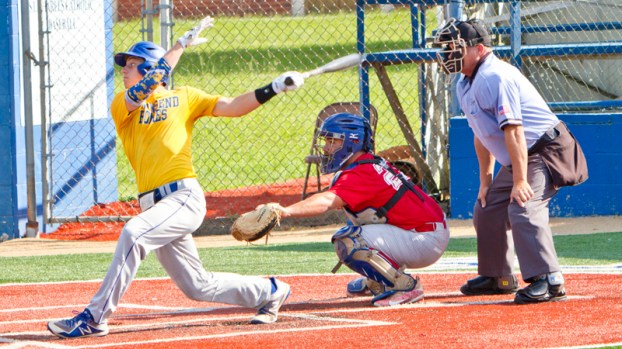 Nick Lorio takes a swing before heading to first base Wednesday during Townsend Homes’ game against the Southland Hogs.

LAPLACE — Some schools view American Legion summer baseball as way to develop young players for the next prep season, while others drive toward championship glory.

St. Charles Catholic’s American Legion program does a little bit of both, according to head coach Wayne Stein.

Incoming senior Peyton Broussard, above, runs back to first base after gunning to steal second base.

“They’re all competitive, well-known baseball schools, so you have to play well to advance,” Stein said.

Stein thinks Townsend Homes is up to the challenge. However, it’s been a rocky start.

Two weeks into the season, the American Legion record is 2-3 and the overall summer record is 3-4-1 when combined with results from last week’s Marucci Classic travel tournament.

This week, Townsend Homes started out strong with a 11-2 win over East St. John PVS.

The team proceeded to suffer a 9-0 loss Wednesday against the Covenant Christian Southland Hogs and a 6-0 loss Thursday against Pedal Valves.

“We didn’t play well,” Stein said after Thursday’s game. “We only got one hit against Pedal Valves. We’ve got to get better.”

St. Charles Catholic kicked off a weekend tournament Friday evening. As of press time Friday morning, the team was preparing for a 5:30 p.m. battle against Dunham and Saturday games against St. Amant, Walker High and Catholic High – Baton Rouge on the Comets field.

Following the tournament, the focus is shifting back to Monday, Wednesday and Thursday American Legion games.

“Every school is a little different in what they are looking for,” Stein said.

“We’d like to win and get prepared for next year’s upcoming season. We’re replacing our catcher and first baseman, so that’s up for grabs. There’s an outfield spot and a designated hitter position up for grabs. We have 65 kids in the program competing hard for spots in our lineup.”

Adding depth to the pitching staff has been a major focus, according to Stein.

He said Jason Bosco has been an early standout among a roster of 12 returning seniors.

“Six games in, Jason Bosco has done a great job in the leadoff spot, trying to fill the shoes of Lloyd Nash,” Stein said. “Right now, he’s the freshest face that has stood out.”

Limited practice times are a challenge during the summer, Stein said, adding many players are kept busy conditioning for other sports.

Townsend Homes plays an away game against Warren Easton at 5 p.m. Monday. A home game is scheduled for 5 p.m. Wednesday against Destrehan High ES&H.

LAPLACE — For the past year, the St. Charles Catholic Lady Comets volleyball and softball teams have been on cruise... read more