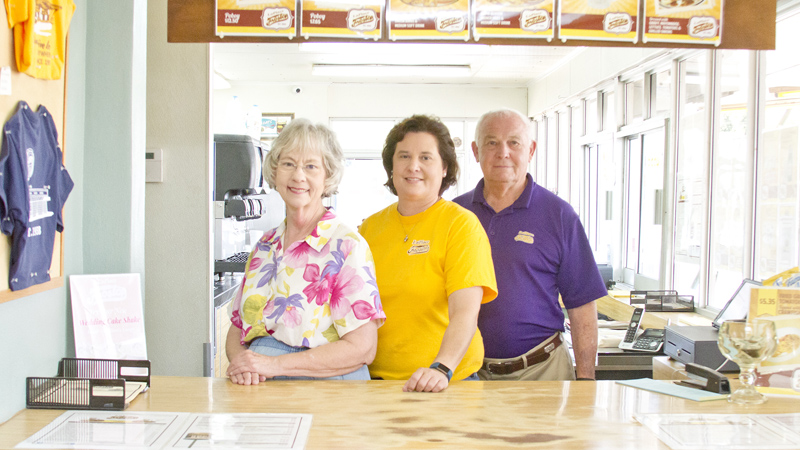 LAPLACE — Frostop’s iconic spinning mug has greeted motorists traveling down Airline Highway for the past 60 years, signaling a longer run than any other restaurant that has ever existed in LaPlace.

Co-owner Terry Toler said heart and dedication has allowed LaPlace Frostop to survive the changing decades, and the family owned business shows no sign of slowing down.

A 60th anniversary car show is planned for 2 p.m. Aug. 4. There’s a lot to celebrate, considering Frostop put St. John the Baptist Parish on the map during a recent episode of Travel Channel’s Food Paradise.

The community has been excited to see familiar faces on TV since filming occurred in September, according to Terry, and the broadcast has already brought in new customers.

“The more times have changed, the more people want places like Frostop,” Toler said. “They’re starting to appreciate it more because they like the history behind it. This kind of family business is hard to find anywhere else.”

Lorraine Lauret of Baton Rouge visited the LaPlace Frostop for the first time Wednesday after watching Food Paradise on Sunday, and she was impressed by how different it was from the Baton Rouge location.

The Frostop franchise went out of business in the late 1980s, Terry said, and the 12 that remain across the country are independently owned and operated.

Onion rings, Lot-O-Burgers and frosted mug root beer are the most popular menu items at the LaPlace Frostop, according to Terry Toler.

“You find a little something different at each one,” Terry said, adding the LaPlace Frostop stands out because famous Lot-O-Burgers, onion rings and old-fashioned root beer are made from scratch in-house.

Terry and her parents, co-owners Jimmie and Evelyn Toler, work in the restaurant six days a week, often coming in early or staying late to keep the kitchen and dining area in pristine condition.

That personal touch is key to Frostop’s longevity, according to Jimmie.

Thomas and Benjamin Brock enjoy ice cream on a hot summer day at the LaPlace Frostop.

“I think the customers appreciate seeing the owners because they know if there’s a problem, we’re going to handle it,” Jimmie said. “When you go to a fast food chain, the manager and employees don’t have their heart in it like we do.”

When Evelyn Toler’s father, Morris Terry, opened Frostop in 1958, he saw it as a business investment and leased the business for 15 years.

Once Evelyn and Jimmie took over 45 years ago, it became a family owned establishment that survived even as fast food chains popped up down the street.

Jimmie remembers a time before McDonald’s and Burger King, when Frostop was the main food option in town. Swimmers from Larayo would line up outside the window to order burgers, still dripping wet from meets.

Over the years, the restaurant has welcomed a second generation of employees, children of those who worked in the 1970s and 80s.

According to Terry, owning the restaurant property has been another key to success, along with a strong online presence to accompany the rise of social media.