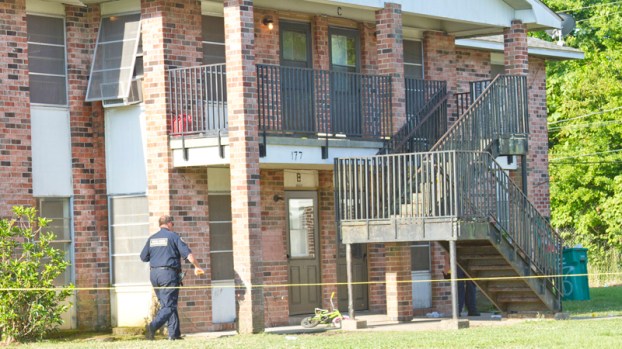 Police work the scene of a LaPlace shooting, where a local man and his daughter, 4, were killed Tuesday night on Joe Parquet Circle in LaPlace.

“The gunman just came up behind him and opened fire” — Dad, daughter killed in LaPlace

Police discovered a horrific shooting aftermath as a local man and his 4-year-old daughter were clinging to life.

The male was initially conscious and talking, Sheriff Mike Tregre said, adding a family member was trying to take the girl to the hospital.

A deputy rushed the child to the hospital, but, tragically, the 4-year-old was pronounced dead at a LaPlace hospital shortly after the 8:56 p.m. shooting.

The male victim was airlifted to University Medical Center New Orleans Tuesday night, but authorities announced Wednesday morning he succumbed to his injuries.

Authorities have not officially released the names of the victims.

According to Tregre, the man was returning to his home on the second floor of a two-story, fourplex with families occupying the units.

Police believe the male victim was involved in a weekend confrontation and are investigating if that is tied to Tuesday’s vicious shooting.

“The gunman came out of the darkness as the victim and his daughter were walking up the stairs — the father carrying the child in one hand and groceries in the other hand,” Tregre said. “The gunman just came up behind him and opened fire. There was no warning.”

At this point, police believe there was a single gunman but are not releasing suspect information.

As for cooperation from the community, Tregre said detectives are not receiving “as much as we would like.”

Anyone with information about the shootings is encouraged to call the St. John Sheriff’s Office Tips Line at 985-359-TIPS, Crimestoppers at 504-822-1111 or submit a crime tip through stjohnsheriff.org/forms/forms/crime-tips/.