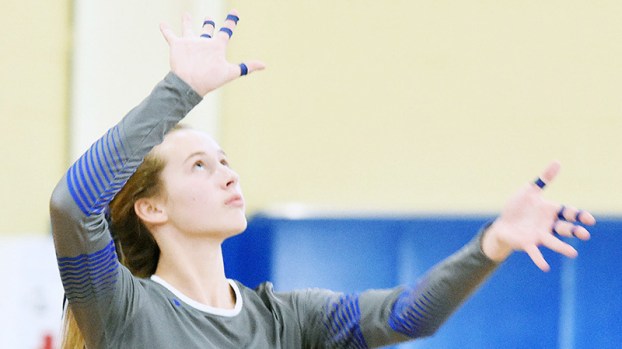 LAPLACE — For the past year, the St. Charles Catholic Lady Comets volleyball and softball teams have been on cruise control, driven by the experience and leadership of senior starters.

Brooke St. Pierre has started alongside talented older players since she was a sophomore, and next year, the reins will be handed over to her.

“Our seniors were ‘the team’ for both sports I played this year,” St. Pierre said. “Those were the girls I’ve always looked up to. Coming into my senior year, it’s totally different because I’m going to have to be the leader now.”

Brooke St. Pierre is being counted on during the 2018-19 academic year to serve as a driving force and player leader for the St. Charles Catholic volleyball and softball teams.

To St. Pierre, being a leader means encouraging the girls on the team to have confidence in their plays and never give up, no matter the odds.

Volleyball coach Meghan Ericksen is confident St. Pierre’s experience and enthusiasm for the game will allow her to easily fall into the role.

“Brooke is all that a leader should be,” Ericksen said. “She does what she’s told to do. She helps the girls that are struggling, and she doesn’t bring any drama.”

St. Pierre’s strong serve and ability to hustle have been instrumental to the team, Ericksen said.

With just five returning varsity players coming off the bench for next season, St. Pierre said the volleyball team has learned from the best.

“It’s going to be a whole new team since last year, and it’s going to be a lot of trial and error with new girls who have to learn the game,” St. Pierre said. “They’ve watched the seniors start, so I think it’ll be pretty good.”

St. Pierre feels prepared. In softball, she plays by the words of coach Ty Monica: You’re only as good as your last performance.

“I love how you’re never going to be perfect in softball,” St. Pierre said. “Sometimes it’s a game of failure, but you can always pick yourself up and get better each and every day.”

At the conclusion of the Lady Comet’s softball season, Monica told L’OBSERVATEUR he plans to base next year’s team around St. Pierre and Kelsie Williams.

St. Pierre has made a name for herself in the program among the older girls, securing first team all district honors for the past two years.

In volleyball, a sport she’s played from a young age on travel teams, St. Pierre received second team all district for her junior year.

As in softball, St. Pierre said success on the volleyball court can be hit or miss, but she loves the upbeat pace of the game.

St. Pierre is the daughter of Stephen and Christa Arcuri of Garyville.