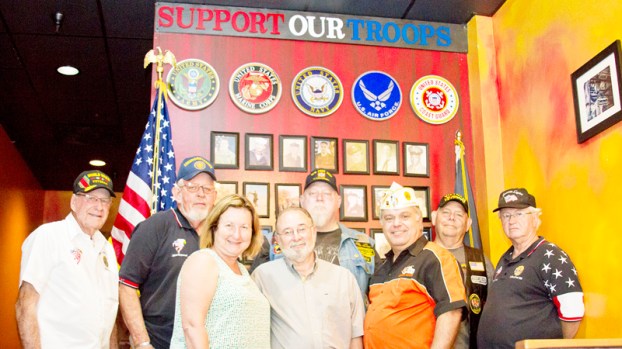 He imagines the young and old walking up to the portraits, proudly pointing out friends and relatives while reminiscing about times past.

Veterans from all wars of recent memory are represented, and plaques commemorate the U.S. Army, Navy, Air Force, Marines and Coast Guard.

The PJ’s in LaPlace has become a forerunner in the initiative and the first business in Southeast Louisiana to honor veterans with a photo wall, according to Sullivan.

Patriotic music, refreshments and a visit from the American Legion Louisiana commander are planned for the official veterans wall dedication at 10 a.m. Saturday at PJ’s Coffee of LaPlace, 1808 W. Airline Highway.

The dedication is a joint effort between PJ’s owners Tom and Robin Lewis, Combat Veterans of America and local American Legion posts.

A group of American Legion members from LaPlace and Metairie first noticed the veterans wall six weeks ago while congregating at PJ’s after a funeral.

“When a veteran comes up with an idea like this, it shouldn’t be left to just one person,” Franques said.

“It’s a team effort, and it’s up to us to make this worth something.”

Franques encourages community members to add portraits to the wall, which runs the gamut in representation, from active duty service members to veterans who have passed on.

Veterans from all wars of recent memory are represented, and circular plaques commemorate the U.S. Army, Navy, Air Force, Marines and Coast Guard. An American flag and a POW MIA flag hang beside the display.

Owner Tom Lewis said more than 40 portraits have come in so far, with more arriving every day. The momentous community response has prompted expansion to a larger wall, he said.

Lewis’ son is a sergeant in the National Guard who served two tours in Iraq, and his grandfather served in WWII. Starting the veterans wall was a way to honor family and all of the veterans who regularly come to the shop.

Franques said it’s significant and uncommon for an independent business to honor veterans.

“It makes a veteran feel good knowing a place like PJ’s is willing to do something like this,” Franques said.

“Things are starting to happen for the veterans.”

LAPLACE — Anna Guidry wants parents to be aware of even the smallest changes in their child’s health, knowing from... read more