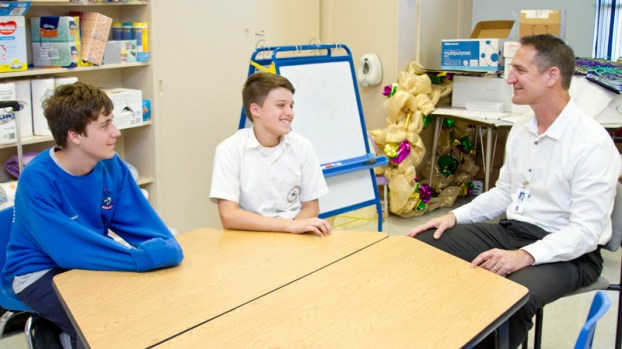 Next month, Connor will travel to Savannah, Ga., to compete in the social studies division of the 2018 National Junior Beta Convention.

At the state convention, held earlier this year in Lafayette, Connor placed third on a written test. Questions centered on history, politics and identifying quotes.

Performing well on tests is nothing new for Connor; he tied for the highest score on a recent St. Charles Catholic placement test, earning a scholarship and a seat in the honors program.

Matthew is on a similar path, having turned his interest in world history into a Higgins Boat research project that won first place at school, regional and state social studies fairs earlier this year.

A passion for history is one of many qualities Matthew and Connor share.

The boys are active members of Junior Beta Club and participants in District Day. While Connor competed in social studies, Matthew posed for a “living literature” tableau vivant style depiction of the Nativity.

Honor roll achievements, altar serving and soccer are among their similarities.

Though soccer is his favorite sport, Matthew also swims for Larayo, runs cross-country and plays football.

He’s an active member of student council, where he organizes fundraisers.

Connor and Matthew describe themselves with the same adjective: weird, but in a good way.

“I’m friendly, and I want to say I’m normal, but I’m pretty weird,” Matthew said. “I do things that are strange at times, and it always gets a laugh.”

Connor said he’s “that weird kid” that people try to avoid at first but eventually become friends with. When it comes to managing his school obligations, he keeps a laid-back outlook.

“I try my best and see how life plays out,” Connor said.

“What makes Connor really strong in social studies is that he’s independently curious,” Flynn said. “He does a lot of research on his own and reading on his own. He’s a steel trap with his memory.”

Flynn said Matthew is never satisfied with what he knows.

“Matthew is always asking more questions and trying to get deeper into the subject,” Flynn said.

“He’s a great writer, and he represents us well in the social studies fair.”

Principal Jeff Montz said parental support has a lot to do with the boys’ accomplishments.