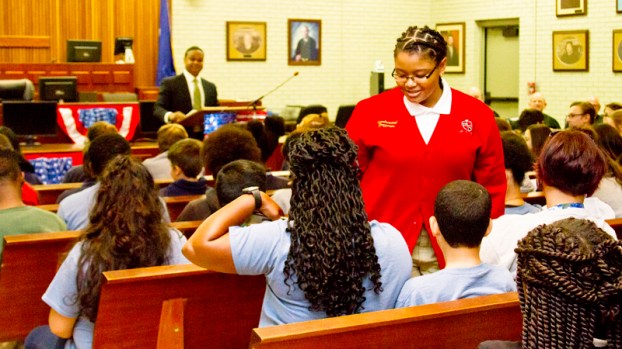 Emani Payne leaves her seat in May in the Edgard courthouse after successfully answering a question posed by Assistant District Attorney Orenthal Jasmin. She was one of more than a hundred participating students in the annual Law Day event.

EDGARD — While all three branches of government influence society with checks and balances, John L. Ory eighth grader Sophia Gil believes the judicial branch is the most impactful.

In her essay, which won first place and $100 at Law Day 2018, Sophia explained how due process in courtrooms around the country allows for self-expression and direct public involvement.

Students listened to a speech from Fifth Circuit Court of Appeal Judge Jude Gravois and competed in a Jeopardy-style trivia game.

She said the most interesting part of the topic, highlighted in her essay, is that the Founding Fathers took aspects of other government systems and made it their own.

“Most kids my age don’t understand the concept of separation of powers,” Allison said. “This is a way our country is able to have freedom. If you don’t understand it, how are you going to improve it in the future?”

Allison said she enjoyed her first trip to the Edgard Courthouse, adding the educational highlight of the day was the trivia game.

Questions prompted students to identify the veto process, tie-breaking procedures, the electoral college process, terms for Supreme Court justices, the birthplace of the Constitution and more.

“I think learning about the law from people who practice it opened my eyes to see that this is real life,” Allison said. “It’s not just something you read about.”

Though Law Day is an old tradition, Division C Judge J. Sterling Snowdy said there is variation in each event’s theme and activities.

This year focused on sixth through eighth graders, and Snowdy said the Courthouse staff stays in touch with teachers to match lessons to students’ curricula.

“We try to change the format sometimes so it’s not too dry,” Snowdy said. “We teach and get them involved because the children are our future. There are future judges and lawyers and council members in our audience.”