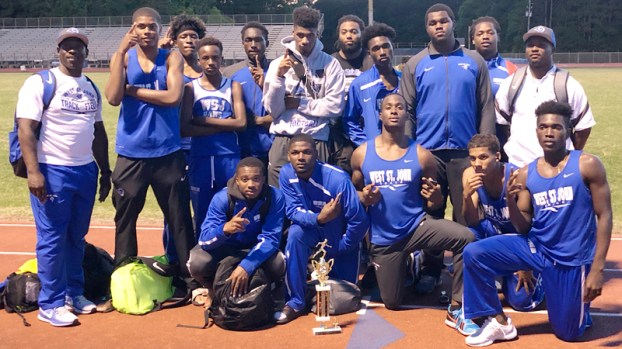 EDGARD — For the first time since 2008, the West St. John boys track and field team placed first in regional and district competition, signaling success for a program shooting for its first state title.

The Rams came up short this year in that main goal, placing sixth with 24 points at the recent LHSAA 1A state championship meet in Baton Rouge.

Rams senior Kyree Thorne follows through on a discus throw.

At district, held at St. Martin’s in Metairie, the boys earned 139 points, followed by a 95-point achievement in a regional meet hosted by Ponchatoula High School.

First-year head coach Tyler Lewis was a junior when the Rams earned state runner-up finish in 2008.

He’s happy to be home and ready to make history.

“We fell short on the state title, but it’s been a very successful season,” Lewis said. “Our field events carried us. The guys beat their personal bests and always gave it 110 percent.”

With a team of 15 boys and only five graduating seniors, Lewis is confident returning talent will produce a lot of speed and ambition.

“Our team is young,” Lewis said.

“I expect them to get faster and stronger, and we’re going to compete. We’re going to be talented for a little while. ”

Discus, javelin, shot put and high jump were this year’s strengths, with some of the guys taking additional awards in single runs and relays.

Lewis said he was pleased to coach hard worker John Holmes, state runner-up in the high jump and 400-meter dash.

Holmes proved multitalented when he surprised Lewis by finishing his stretch of the 4x400m in 50 seconds flat.

Lewis said the sky is the limit for Trenton Grow, another talented and competitive athlete who often pushed Holmes to his limits. This season, Grow performed well at District and earned second in the 400-meter dash.

“I tip my hat to him because to do all those events at one time isn’t an easy task,” Lewis said.

“When asked to perform, he showed up and produced points for his team.”

Kyree Thorne and Calieb Batiste also had phenomenal seasons, according to Lewis. They served as leaders in field events, racking up points and achieving personal bests.

In discus, Thorne threw 158 meters, and Batiste threw 156 meters, both placing in district.