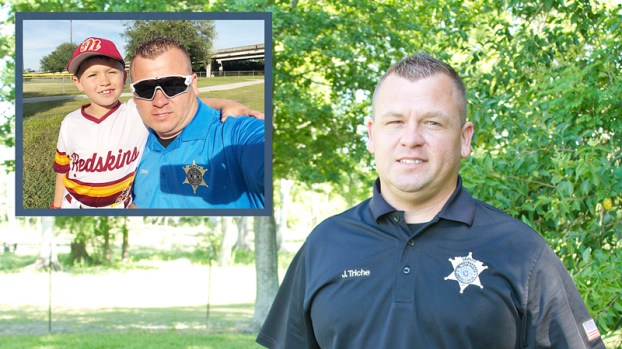 Sgt. Jason Triche, back at SJSO for more than a year following a brutal shooting, said his recovery jumped up considerably when he began taking jujitsu with son Peyton, pictured inset, at Gracie United.

Hometown Heroes: Shooting not holding back Triche, who feels 100%

LAPLACE — It’s nothing short of a miracle that Sgt. Jason Triche is able to pull on his blue uniform every morning and report to work at the St. John Sheriff’s Office information technology department.

In August 2012, Triche was pushed to the brink of death during a shootout with antigovernment individuals in LaPlace. The incident forever changed St. John the Baptist Parish, killing two deputies and leaving two others severely injured.

Gunshots disintegrated Triche’s right kidney. As he dragged himself to a police unit and drove to River Parishes Hospital, blood rapidly drained from his body and left his remaining kidney damaged beyond repair.

Before the shooting, Triche ran four miles a day, six days a week.

In the four years following, Triche endured more than 30 surgeries and near-constant kidney dialysis, leaving him perpetually weak. He barely ate and hardly slept as he battled PTSD flashbacks and depression.

Despite the circumstances, Triche’s story is one of triumph.

He’s been back at work and feeling great since April 2017, and it all goes back to the unexpected generosity of kidney donor Andre Ardeneau, a deputy with the St. Tammany Parish Sheriff’s Office.

“I met Andre and his wife Brittany in June 2016 and found out he’d be donating one of his kidneys to me,” Triche said. “I was ecstatic. I was expected to have to wait three to five years, so finding out I could get it in the next month made me even happier.”

Jason Triche is seen with Brittany and Andre Ardeneau. Andre donated a kidney to Triche.

A couple of days after the transplant, Triche started feeling like his old self. Once he took up jujitsu at Gracie United in LaPlace to stay active with his son, Peyton, he noticed an immediate change.

“The doctor said I was like a totally different person,” Triche said. “It ramped up my recovery. I was more alert. My PTSD went away.”

Throughout the whole process, Peyton has inspired him to keep pushing forward.

Today, Triche is back to 100 percent, and he puts his college degree to work with a new position in information technology.

“When thinking of local heroes, Jason Triche is one of the first people who comes to mind,” Tregre said.

“He’s been through multiple surgeries and a kidney transplant, and he never misses a day of work. A lot of guys have an experience like that and never return to law enforcement.

Deputy Chip Wale was on scene during the traumatic 2012 shootings. He said the aftermath sparked nationwide interest in sovereign citizens and left officers shaken.

“Jason Triche is an honest and humble guy, quiet and hardworking,” Wale said. “He’s come back from something most people wouldn’t be able to recover from.”

RESERVE — Enrichment classes are more than a planning period for teachers or a brain break for students, according to... read more