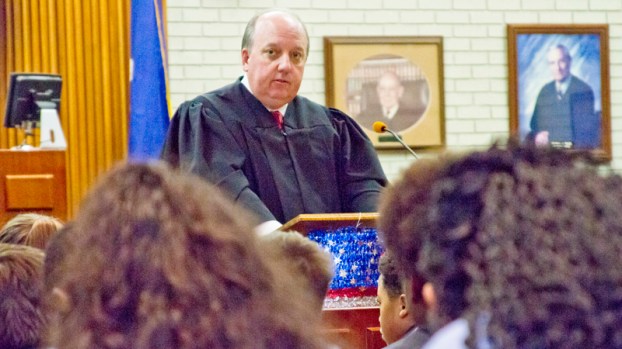 Division B Judge E. Jeffrey Perilloux speaks to students in May at Law Day in Edgard.

EDGARD — The tradition of Law Day continued Friday, like it has in years past with members of the 40th Judicial District Court hosting local students and sharing with them themed elements of our legal system.

This year’s event; however, was noteworthy because of Division B Judge E. Jeffrey Perilloux’s presence after initially  indicating he was not going.

On one hand, it was expected considering Perilloux’s office worked for months encouraging local media to attend and promoting the day’s many benefits.

Yet, it was also unpredictable as Perilloux is facing a mountain of negative attention stemming from at least two criminal investigations spread across Louisiana and Florida involving alleged claims that the judge sexually assaulted an underage female.

Authorities with Louisiana State Police and the Okaloosa County Sheriff’s Office in Florida have interviewed numerous teenage girls, some of who are friends of Perilloux’s daughter, and received complaints from at least two individuals who said Perilloux inappropriately touched them.

The investigations are at least 10 months old, as Okaloosa authorities said they were first notified July 15, 2017, of a criminal complaint.

As of Friday morning, no agency has made the decision to file charges or consider the case closed for lack of evidence.

Officials with Okaloosa County have maintained for more than a week that their evidence collecting and witness interviewing is complete and a decision on charges is tied to moves that first need to be made by authorities in Louisiana.

How and why the investigations in two states are linked has not been shared publicly by any of the agencies.

The situation was exasperated Tuesday afternoon when The New Orleans Advocate published sourced details from Louisiana State Police’s investigation detailing a 15-year-old’s claim that Perilloux slid his fingers inside her bathing suit bottom during a Florida vacation and inappropriately stroked her breasts in separate incidents that took place last summer in St. John the Baptist Parish.

Perilloux said he first heard of the allegations when The New Orleans Advocate reported them.

In speaking with L’OBSERVATEUR, Perilloux said he did not have any immediate plans to step down but added the situation and his understanding of the complaints was unfolding quickly.

“My plan will be to serve the people who elected me to serve for as long as I am able to do so,” Perilloux said. “I love this community. I will continue to do the job that the people have elected me to do until such time as I am no longer able to.”

Perilloux secured the services of attorney David Courcelle, who said he is waiting to learn more about the real allegations from law enforcement.

“We don’t really know,” Courcelle said. “We’re working on trying to find out what the alleged victim is saying at this time.”

Courcelle said Louisiana State Police and the Okaloosa County Sheriff’s Office had not contacted his client, adding Perilloux had not provided any statements to Okaloosa or State Police.

Louisiana State Police investigators are believed to have completed their investigation; however, it is not known how the complaint originated or if it involves a separate alleged victim from the Florida complaint.

Louisiana State Police officers are known to have spoken to several St. John the Baptist Parish females concerning Perilloux’s alleged actions, which were said to include inappropriate touching and texting.

The A.G.’s office is preparing to present the investigation’s findings to a grand jury for potential charges.

Judge Jeff Perilloux, center, was sworn in as a Judge of the 40th Judicial District Court in Edgard. Pictured, 40th JDC Judges Sterling Snowdy, right, and Madeline Jasmine were on hand to present a new robe to Judge Perilloux.

The 40th Judicial District Court covers St. John the Baptist Parish and is divided into three divisions — A, B and C — one judge presiding in each division. The general jurisdiction court hears civil, criminal, traffic, juvenile, family and probate matters.

Jasmine and Snowdy are not commenting on the case, and it was reported that each recused themselves from signing off on a search warrant concerning the Perilloux investigation in an effort to avoid impropriety. An employee in Snowdy’s office said business in 40th Judicial District Court worked this week under standard operating procedure, adding “nothing has changed.”

When contacted, Gauff and Snyder politely declined to comment on the Perilloux investigation.

The 2016 election was necessary to fill the unexpired term of departing Judge Mary Hotard Becnel, who was unavailable for comment this week.

Perilloux has practiced law in St. John Parish since 1994, served as an assistant district attorney for 12 years and served as legal counsel for St. John the Baptist Parish Government.

The U.S. Supreme Court oversees judges, and on the recommendation of the Judiciary Commission, the Supreme Court may censure, suspend, remove from office or involuntarily retire a judge for a number of reasons including conduct that brings the office into disrepute or constitute a felony conviction.

Louisiana’s Commission makes recommendations to the Court and reviews cases based on filed complaints. A Commission representative did not comment on any pending reviews of Perilloux.

Knock, knock: Here’s a punch in the nose

LAPLACE — Some arrests come with more fight than others. According to the St. John Sheriff’s Office, 22-year-old Eli Juan... read more