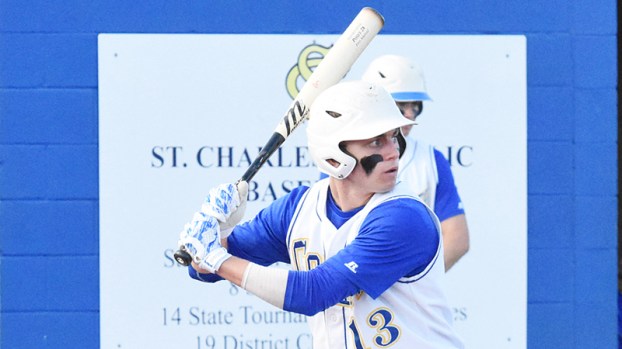 Nick Lorio gears up for a swing during the playoffs.

LAFAYETTE — After giving a strong performance against Teurlings Catholic Friday evening, the St. Charles Catholic Comets ran into trouble in the second and third games, ending the playoff season with a quarterfinal loss in Lafayette.

Head coach Wayne Stein said the Comets never backed down, but came up short after a noticeable shift in momentum.

Nick Roberts threw extremely well Friday, holding the opposition at the batter’s box for most of the game. Roberts also knocked in two runs, allowing the Comets to exit the first game of the three-parter with a 4-1 win.

Despite Nick Lorio connecting on a two-run homer in game two, the Comets couldn’t fight back against Teurlings Catholic, eventually suffering a 7-11 loss.

Stein said the Comets missed opportunities to even the score in games two and three, leaving the bases loaded multiple times.

Nick Roberts was strong for the Comets from the pitcher’s mound and batter’s box Friday.

The defeat was hard, especially for the six seniors hanging up their high school uniforms, but Stein said the boys deserve to hold their heads high in celebration of a successful season.

“We won 28 games this year, which has to be up there for the most wins in a season in school history,” Stein said. “We had a chance to win in 36 of the 39 games we played. I think a successful season means you get better, and that’s what we did.”

The team is gearing up for American Legion summer ball, which would serve as the precursor to next season and give returning players a chance to establish leadership roles on the field.