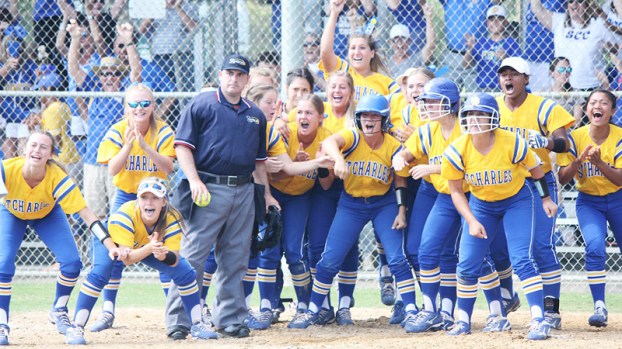 The St. Charles Catholic Comets gather around home plate in 2018 waiting for Jade Brady to come in following a home run in a semifinal win over Hannan. (Photo by Stephen Arcuri.)

With the LHSAA Division II runner-up trophy in hand, the girls savored the excitement that came from experiencing a championship game alongside a supportive crowd.

Pylar Zeringue went 2-for-2 at bat and brought in St. Charles Catholic’s only run.

SCC’s most impressive play came earlier in the day, when the girls found redemption against Hannan following a 10-2 loss earlier in the season. Jade Brady pitched seven successful innings and came in clutch at the plate with a 3-run homer to center field to take the semifinal win.

Exiting the weekend in second place wasn’t a cause for sadness, Monica said. The bittersweet feeling came from realizing a vital portion of the team had put on their Comets jerseys for the last time.

“After the game, it wasn’t so much disappointment about the loss, but knowing we’ve got seven seniors we have to say goodbye to,” Monica said.  “Those girls put in a lot of time and effort into the program and left it a better place. I told them to hold their chins up high and wear it proud. I think they did exactly that.”

The girls mastered balancing academics and athletics, attaining impressive ACT scores while bringing in runs on the softball field.

“If they’re not the ‘winningest’ class in St. Charles history, they’ve got to be pretty close to it,” Monica said. “They have a lot to be proud of. I became a better coach during the season because of the girls that were around me. Somebody told me a long time ago that if you surround yourself with good people, you’re destined to have success.”

Next year’s squad will be young, Monica said, and he anticipates building the team around rising seniors Kelsie Williams and Brooke St. Pierre.