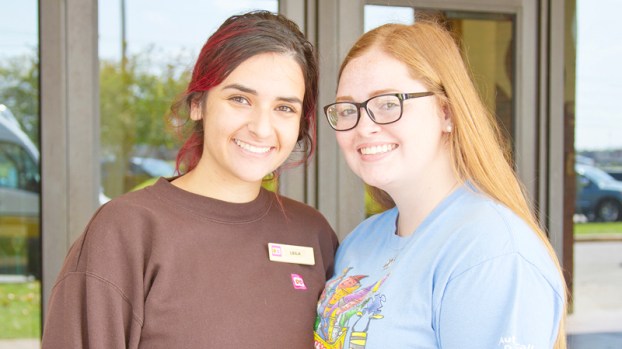 Growing up alongside an older brother with autism taught Brianna Pray of LaPlace compassion for others and inspired her to pursue a degree in special education at Southeastern Louisiana University.

Knowing her best friend’s passion for autism research, fellow 2017 Riverside Academy alumna Leila Ahmad thought of a way to get the St. John the Baptist Parish community involved at her workplace.

Throughout April, Dunkin’ Donuts in LaPlace sold specially made awareness donuts and collected $400 for autism research.

With bright, royal blue icing and a white chocolate puzzle piece topping, each sweet treat reflected the complexity of the autism spectrum.

Pray said those schools were chosen as a way to give back to the staff members who cared for her brother, Caine. Next year, she plans to involve more schools and businesses.

The purpose of the project is to get people to think more critically about autism, according to Ahmad.

Throughout April, Dunkin’ Donuts in LaPlace sold specially made awareness donuts and collected $400 for autism research.

“I feel like autism is something that’s known, but if you don’t have someone related to you with autism, you don’t interact with it,” she said.

“Maybe next year, more schools and businesses see how well the donuts did and want to do something bigger to help support the cause,” Ahmad said.

Pray and Ahmad said the smiles on people’s faces signaled they were doing something worthwhile.

“The kids were very excited,” Alexander said. “Not every child in the class has autism, but they all know about it because we promote autism awareness all year long.”

Alexander recalls teaching Caine Pray, and she commends the girls for the work they are doing. Since the school visit, she’s spread the word to others to head to Dunkin’ Donuts.

“It’s very unique that they are conscientious young girls who could be doing anything, but they are choosing to dedicate their time to this,” Alexander said.

“We’re lucky to have those girls because they truly enjoy helping out in the community,” Chauhan said. “They don’t see it as work.”