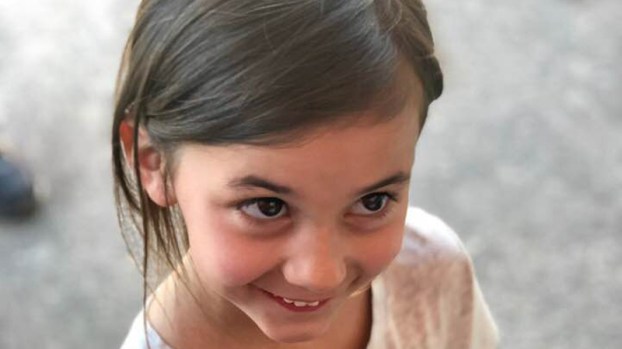 Maybe a little shy at first, Addisyn Teekell was known to so many as a giver, a special little girl who freely handed out hugs, kisses and smiles.

That caring touch was something Addisyn’s father Benjamin — a K-9 Deputy with the St. John Parish Sheriff’s Office — relied on after stressful days.

“This child had an amazing ability to put me at peace and calm me down after a stressful day at work, always rubbing my head when I came home,” Benjamin said. “She would just make all my worries disappear.”

Deputy Dawn Webre, right, presents Ashtyn Teekell with a birthday gift during a replacement blood drive in support of the Teekell family. Ben is a K9 officer with the SJSO.

Addisyn, 5, also loved her father’s K-9, Turbo, but she hated getting licked in the face. Why would “a princess” like getting all messed up?

“Anytime Ashtyn would talk, she would be right behind her with something,” Benjamin recalls. “She loved interrupting her sister, but Addisyn was full of love.”

Having celebrated a birthday Feb. 27, Addisyn recently learned how to do cartwheels, those athletic flips contrasting with her soft-spoken nature.

“But, her smile screamed,” Benjamin said. “Her bubbly personality was infectious.”

Another Addisyn trademark was the tutu, which perfectly fit her personality and was a near constant for her play-around wear.

Madison Wilson and Autumn Teekell take a moment to smile at a blood drive sponsored by the St. John the Baptist Parish Sheriff’s Office.

It’s with that perfect picture of Addisyn on their minds that the young girl’s family is launching “Tu-Tu’s for Addisyn” following the child’s tragic death earlier this month.

Addisyn died April 6, the result of injuries suffered when a drunken driver struck her family’s vehicle in St. Amant.

Benjamin said they are looking at several avenues, adding it’s a day-by-day process; however, collection efforts have begun.

Those interested are asked to mail brand new (unfortunately, used ones cannot be accepted) tutus to the main campus of Healing Place Church, 19202 Highland Road in Baton Rouge, 70809. The tutus will be collected and eventually given to young girls in need at local hospitals and by special delivery to St. Jude Children’s Research Hospital in Memphis, Tenn.

The plan to give back is special to Addisyn’s parents and sister, who say they have benefited greatly in the aftermath of the tragedy, receiving countless visits, deliveries from across the nation and donations to a special account set up by the Sheriff’s Office at Regions Bank — “TEEKELL FAMILY BENEFIT ACCOUNT.”

“From the very beginning, St. John has been here for us,” Autumn said. “I want to thank Our Lady of the Lake for everything they gave to us, and I’m grateful to each person who gave back in honor of our daughter.”

Behind the scenes, members of the St. John Sheriff’s Office continue to help the family.

Benjamin said Sheriff Mike Tregre was at the hospital and immediately by his side with other members of the Sheriff’s Office on April 6, adding every member of his Special Operations Division visited the night of the wreck.

The love and support has benefited the Teekells’ oldest daughter, Ashtyn, who turned 7 on Tuesday and returned to school this week at Pecan Grove Primary School in Gonzales.

She suffered a fractured collarbone and broken pinkie finger in the crash but is expected to make a full recovery.

“The support from the community has been absolutely phenomenal,” Benjamin said. “Law enforcement officers from all over the nation have been sending her patches and challenge coins. The community of St. John — and really all over — has been amazing. I don’t see how people do this on minimal support. We’ve been having phenomenal support and it’s only just manageable.”

Benjamin said it is important to know Addisyn, who loved to give hugs in life, is still able to give in death through the amazing support demonstrated in her name.

“We know her death wasn’t for nothing,” Benjamin said. “I believe everyone has a purpose. I believe the Lord was able to change something tragic into something inspirational.

“Addisyn used to love to say, ‘let me hug you,’ which just meant she would sit in your lap. This is her way of being able to hug everybody back.”