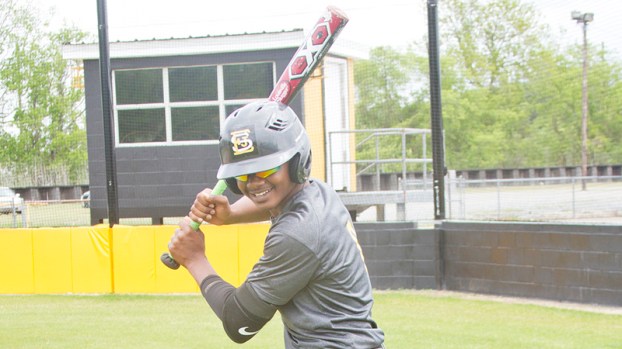 Catcher and slugger Kevon Breaux is one of the “top five catchers” in Louisiana, according to head coach Wendell Henderson.

The season record stands at 10-14 (2-7 in District), but head coach Wendell Henderson said the skill shown in two recent wins against Thibodaux might be enough to propel the underdog Wildcats to a playoff run.

“Making it to the playoffs depends on them,” Henderson said. “The way they played the last three or four games, I think they’ve got a shot. If they don’t, it’s a learning curve.”

Since the season’s start, the Wildcats have gained an understanding of the game that has translated to unity on the field, according to Henderson.

A desire to fight and compete sets this year’s squad apart from players of the past who struggled to keep afloat in a wide open District, Henderson said.

Communication on the field has been a major strength in recent games, and the boys are demonstrating focus in their individual positions.

There’s still a lot of development that needs to happen before observers consider the team a powerhouse, but Henderson is satisfied with the direction the program is taking.

“We’re coming together as a group,” Henderson said.

“It took us a little time to get things rolling, starting off pretty hot and then cooling down for a while like most baseball teams do. Overall, I’ve been satisfied with the way they play. Even the games that we’ve lost, we played well.”

Cutting down on errors has been a focus during practice. Henderson said his main concern is ensuring the team finishes the seventh inning the way players begin the first without slacking off along the way.

“If we play a complete game, no matter what the score is, we’re a real good team,” Henderson said.

Hitting and pitching need to be refined, Henderson said, adding the team has been adequate but not overwhelmingly strong. He said the Wildcats’ pitching repertoire is starting to build up with help from Rayvon Joseph, Herman Farlough and Lonnie Ellis.

Helping matters is Joseph’s outstanding play at shortstop. Throughout the course of the season, he’s improved in pitching and has produced several successful outings this month.

One of five juniors on a fairly young team, Joseph has time to grow. Henderson expects he’ll be one of the guys carrying the Wildcats next year.

Farlough remains the team’s go-to pitcher, according to Henderson.

“Whenever Herman takes to the mound, we know we have a chance to win,” he said. “He’s one who can dominate a game.”

Ellis is very effective at throwing curve balls on good days, Henderson said. He’s held up the team’s defensive front in the outfield and has swung the bat well to maintain a .333 average.

“Not bragging about it, but Kevon has got to be in the top five catchers in the state of Louisiana,” Henderson said.

Martin is coming along with his hitting, keeping a .400 on-base percentage. Moving forward, Henderson said the only objective is to keep fighting.

“We can’t take anything for granted,” Henderson said. “We know that now. This team is getting better every day, and I’m very proud of the boys.”

RESERVE — Four finalists have been named in the search for one of the most coveted coaching positions in the... read more