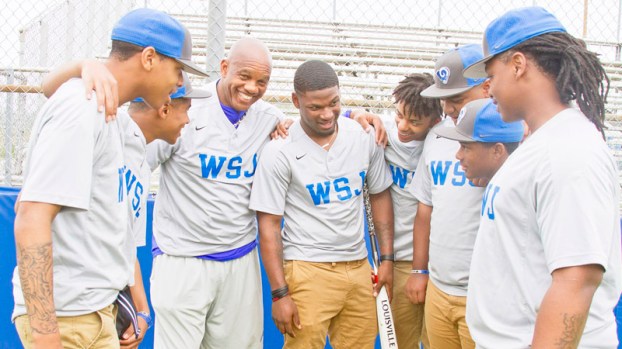 EDGARD — To be successful in baseball, players need to consider it more than a January-to-May sport, according to West St. John baseball coach Greg Joseph.

With dual-sport, student-athletes focused on football glory for half of the school year and other players dribbling a basketball through March, baseball becomes an afterthought to those who don’t play in recreation competition over the summer, Joseph said.

This year’s Rams have seen a respectable 5-6 start, Joseph said, due in part to a handful of players who have swung bats since they were small.

“We have some young guys who have played in good recreational programs,” Joseph said. “Three played in Lutcher from a young age. In the past, we only had kids who played football, then came play baseball.”

He said there is still a lot of room for improvement, and the boys are still developing the mental toughness needed for success on the field. During practice, the Rams are working on coverage, bunting and pitching.

Pitching, in particular, has been a focus since reaching the strike zone has proved difficult during games. The Rams allow too many opponents free access to the bases via walks.

The team is chock-full of players with powerful arms, with some throwing in the mid-80s, according to Joseph. He said power is not the problem; rather, it’s a matter of developing consistency.

Steadiness and dependability is hard to achieve in baseball since it’s a tricky sport, he said.

Comparing it to basketball, Joseph said a player who makes five free throws out of 10 is considered unreliable, while a baseball player who bats a .500 is a star.

The young players have worked hard thus far, and Joseph said it is difficult to single anyone out.

He’s proud of eighth grader Trumaine Schexnayder, who always comes to practice with a great attitude, never complains and sharpens his skills by playing summer baseball.

“All the guys I have come to compete,” Joseph said. “We’re going to continue to play and compete. They might get overwhelmed sometimes because they don’t play enough, but that doesn’t mean they don’t play hard.”

Joseph said the Rams are adjusting through the absence of Wan’trell Williams, a talented player sidelined for eight weeks with tendonitis.

With wins against KIPP Booker T. Washington, Port Allen and 5A schools Landry-Walker and Broadmoor, the team is holding its own. For now, the plan is to play well and play often.

“If we played baseball more often, we’d be a lot better,” Joseph said. “You can practice until you’re blue in the face for these few months, but to pick up on the things we’re trying to teach, you need to keep playing.”